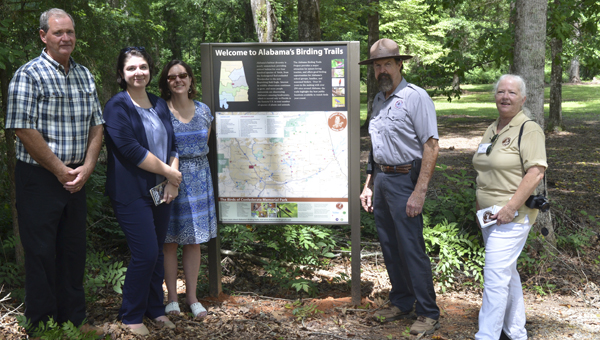 A new sign was erected on Tuesday that highlights the Piedmont Plateau Birding Trail at Confederate Memorial Park in Chilton County.

The sign explains the various types of birds common to the area and also helps point out other trails throughout the state that are conducive to bird watching.

“One of my goals is to have the park as user friendly as possible,” said Confederate Memorial Park Site Director Bill Rambo. “This is just another avenue to accomplish that.”

About a dozen signs are popping up at trails and parks throughout state at sites that were chosen based on geographic and economical importance.

“Alabama has so many different habitats that the birds just go crazy over,” said Joanne Ninesling, project manager with the Piedmont Plateau Birding Trail.

Bird-observers have a large impact on the economies of the areas that they visit.

According to a U.S. Fish and Wildlife 2011 national survey, there are 46.7 million bird-observers nationwide and $734 million was the in state expenditures on wildlife watching by residents.

“Birding people are a different breed,” Ninesling said. “They will drop everything if they find out about an opportunity to catch a glimpse of a bird that is uncommon within a certain area.”

There are about 4,000 species of birds that currently exist in the United States.

“It is just a huge money maker, and yet it costs a family nothing except for the gas to get here,” Ninesling said.

Confederate Memorial Park had multiple advantages that made a likely choice as one of the selected sites, but one factor stood out above the rest.

“It is centrally located and close to the interstate, but the attendance figures are what made us take notice,” Ninesling said.

The park contains several of hiking and nature trails as well as the birding trail among its 102 acres.

“We’ve had some more primitive signs that were setup for a while,” Rambo said. “This may attract people that have no interest in history at all, but they might discover a little bit once they get here.