Tierce looks to leave her mark as 2016 Miss Peach

Hannah Tierce’s nerves were suddenly calmed when she heard her named called as the winner of the 2016 Miss Peach Pageant on Thursday.

“The competition was really strong this year, and I knew that a lot of the girls were ready to win,” Tierce said.

The preparation prior to the pageant included studying facts about peaches and Chilton County for the interview process and picking out the proper attire.

According to Tierce, the hardest part was selecting the outfit for the casual wear portion of the event. 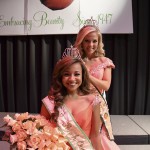 “You never know what the judges are looking for and how casual you need to go,” Tierce said.

The Peach Pageant has always held a special place in Tierce’s heart, as it was the first competition that she entered when she was 11 years old.

Tierce has experienced previous success, having won Junior Miss Peach in 2012. However, it was the first time that she had been in the Miss Peach Pageant.

She plans to use her platform to focus on the community’s charities and shine a spotlight on what Chilton County is doing to make a difference.

Since her victory in Junior Miss Peach, Tierce has started an initiative called “Hannah’s Heart,” which seeks to create adoption awareness.

She wants to attend Shorter University after high school.

“I’d like to thank everyone who has given their support of me on this journey, and to the peach farmers and the Lions Club for making this possible,” Tierce said.