As the 2016 Miss Peach pageants approach, and with them the crowning of a new set of queens, it is a time of reflection and thanks for current Miss Peach Queen Kendal Elijah.

Elijah’s summer has been busy with Peach Queen activities. The queens have been guests on television news programs and have enjoyed swim and dance parties leading up to this year’s pageants. 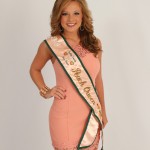 Of course, the arrival of the pageants means the queens must also participate in practices and prepare “farewell” messages and accompanying slideshows.

While Elijah said she thinks the upcoming pageants will be the highlight of her reign as Peach Queen, they will also bring bittersweet emotions because it will be the last time the current group of Peach Queens is together as queens.

And the amount of time they spend together will likely lessen greatly.

“It’s going to be so sad to not talk to all of them all the time,” Elijah said.

Of the three other Peach Queens, Elijah knew only Young Miss Peach Halle Sullivan, who is in Elijah’s brother’s grade in school.

However, the group has all become good friends.

“I feel like I’ve known them my whole life,” Elijah said.

Elijah said some of the best memories of her time as Peach Queen were formed when the group would travel together, such as to the Peanut Festival in Dothan.

The group also had a good time riding together in the vehicle driven by Little Miss Peach Lexie Deavers’ mother Holly. Elijah said they dubbed the vehicle the “Peach Mobile.”

Elijah said her advice for the next Miss Peach Queen would be that while you can’t be completely prepared for the position, she should focus on being herself and the message she wants to convey.

“That’s really all you need to know,” Elijah said. “You have to be confident you can do your job. It’s not what you expect when you go into it.”

Elijah thanked peach farmers for their hard work in producing Chilton County’s most famous crop, local newspapers for their coverage—and, most importantly, mothers of the Peach Queens.

“They do more than you can imagine,” she said.

Elijah graduated from Chilton County High School in May and will attend the University of South Alabama in the fall, where she will study nursing.

Elijah said that after four years of college, she would work as a traveling nurse for two or three years and then return to college for a year to complete her education and eventually become a nurse practitioner.

Elijah said she has visited South Alabama several times and enjoyed the campus and the city of Mobile.