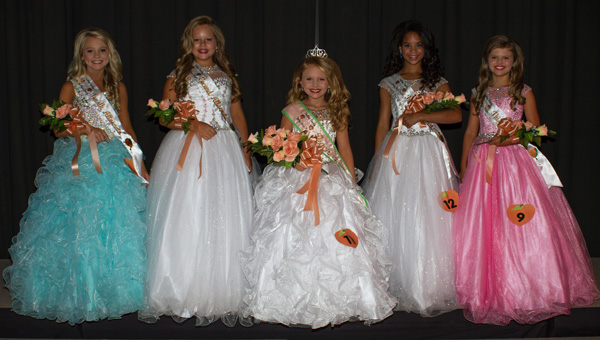 It is difficult to describe the emotions that come with being named a Peach Queen.

Newly-crowned Young Miss Peach Cresley Claire Haggard could only compare it to another experience: “I felt like it was Christmas last night,” she said.

Haggard, 8, was named Young Miss Peach at the conclusion of Monday’s pageant at the Chilton County High School auditorium. 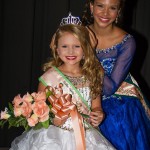 Junior Miss Peach was to be crowned Tuesday night, while the Miss Peach pageant will be held at 6:30 p.m. Thursday. Admission will be $6.

Haggard’s mother, Misty Haggard, said her daughter was the youngest of the contestants on Monday.

The interview portion of the pageant was the most concerning, Misty Haggard said, because Cresley had not interviewed for a pageant since she was 5.

“She was nervous about the interview,” Misty Haggard said. “Being on stage is her thing, but having to be in the room answering questions from three strangers was a little nerve-wracking for her.”

But Cresley Claire Haggard must have impressed the judges.

“When they called her for Casual Wear, I got really excited, but then they started calling the older ones,” Misty Haggard said. “I felt like she had a chance to place maybe, but being the youngest one, I did not think she would win.

“When they called out her number for Peach Queen, I was extremely shocked.”

The Haggards used Cresley’s age to her advantage.

“We had no stress going into this this year because I really just played on her being little,” Misty Haggard said. “I just thought this would be a good experience for next year.

“It is a feeling you can’t explain. I was really excited for her.”

Haggard knew exactly how she wanted to begin her reign, as she visited Peach Park on Tuesday for free ice cream that is one of the perks of being a Peach Queen.

Another perk will be having her picture placed permanently at Peach Park along with the other queens.

“I can’t wait to see my picture on the wall,” Haggard said.

Misty Haggard said her daughter is looking forward to a year of fun and growth as a Peach Queen, and thankful for the outpouring of support shown on Monday.

“The gifts, photos, the Lions Club…everything was wonderful,” Haggard said. “They made her feel like a princess. They made sure she was happy.”

Fireworks shows scheduled throughout the county