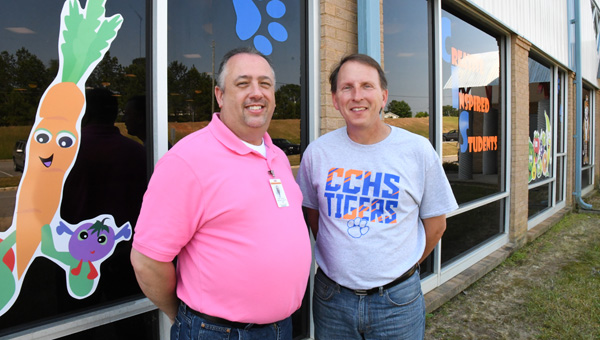 Though they were inside, Clanton Intermediate School students often had to eat lunch under the glare of a hot sun.

One wall of the school’s cafeteria is made up almost completely of large windows. Letting in lots of natural light was a popular design feature when the school was built 15 years ago, but since that time there have been complaints about the almost unbearably bright room.

And easy visibility from Temple Road, which runs in front of the school, into the cafeteria was a safety concern.

The windows were recently tinted, and school officials think the change will cause delight for students, teachers and parents.

Assistant Principal Roger Sheffield and former principal Mark Stephenson said the tinting was completed May 26, and positive feedback has already been received.

“It’s been a long time coming,” Stephenson said. “We needed to do something to protect the students.”

Stephenson said parents of CIS students are surveyed each year about their experience with the school, and the past couple of years the cafeteria windows have received an “overwhelming response.”

The project cost less than $5,000, with funding coming from the school’s parent-teacher organization and the Chilton County Child Nutrition Program.

In addition to safety and comfort, the tinted windows should also help with temperature control in the cafeteria.

Stephenson and Sheffield said more changes are coming to CIS, including the school serving as a pilot for an LED light system.

Stephenson has been transferred to Clanton Elementary School. The new CIS principal will be Louise Pitts.