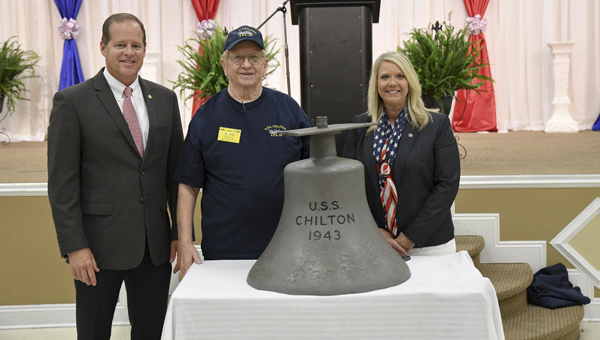 State Sen. Cam Ward (left) and Rep. April Weaver shared a moment with the bell from the U.S.S. Chilton and former crewman Albert Kotrola during a ceremony at Jemison Municipal Complex on May 26. (Photo by Anthony Richards)

The bell that was rescued from the U.S.S. Chilton was officially introduced for the first time to the residents of Chilton County on May 26.

It was presented following a Memorial Day observance ceremony at the Jemison Municipal Complex.

“I think it was a good first step in maybe doing this as an annual observance,” event coordinator Billy Singleton said. “It would be great if this could become a ceremony that the entire county can embrace and share in.”

“It’s an honor to come to an event that recognizes the legacy of those soldiers, sailors, airmen and Marines that gave the sacrifice,” Ray said. “If it wasn’t for them, we wouldn’t be the free country that we are today.”

Ray recently retired after 32 years in the Army and now lives in Verbena.

He has seen firsthand the sacrifice that his fellow military men and women have had to make.

Many people observe and understanding the purpose of Memorial Day, but the day holds even more importance for those who have served.

“To me, knowing what they went through makes it more realistic and personal,” Ray said.

There were about 60 in attendance, which included Albert Kotrola, who served on the U.S.S. Chilton as a hospital corpsman second class and a lab technician from 1956 to 1957.

He helped perform appendectomies and other surgeries while on the ship, and spent time on a Mediterranean cruise that included 500 Marines on board the ship.

“There was a lot of history on that old gal,” Kotrola said.

The bell will eventually be placed in the courthouse for the entire county to admire and remember the past.

“I come from a military family, so I’m very tuned to the sacrifices that are made,” Singleton said. “Hopefully we can continue to do the ceremony with honor and dignity in mind.”

Lincoln and Grace Bingham stand beside the “Little Free Library,” which is now open for business under the pavilion at... read more