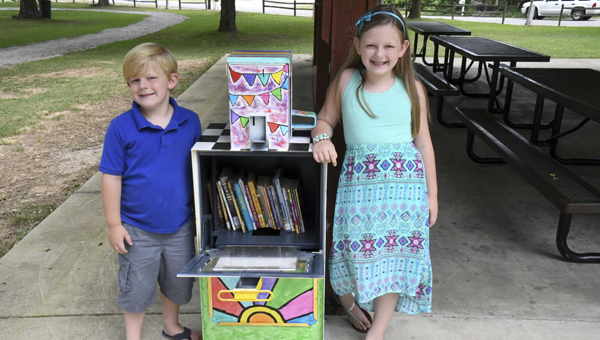 Lincoln and Grace Bingham stand beside the “Little Free Library,” which is now open for business under the pavilion at Richard Wood Park in Thorsby. (Photo by Anthony Richards)

Thorsby has a new library, and though it is small in size, it is free to kids in the community.

The “Little Free Library” officially opened with a ribbon cutting by the Chilton County Chamber of Commerce on May 23.

The library is part of a community service project that was orchestrated by Chanel Bingham and her daughter Grace Bingham, who is a third grader at Thorsby School.

“We had been searching for a project that would benefit the county and instill values in our children,” Bingham said.

The town of Thorsby no longer has a library, and the school library will no longer be an option for children once the school semester comes to an end.

According to Bingham, studies show that up to 30 percent of a child’s reading capability is lost over the summer months.

“My children developed a love of reading over the past year, and we wanted to share that by giving kids that opportunity,” Bingham said.

The library policy asks that a child add a book each time that they take a book from the library.

According to Bingham, the child does not have to return the same book previously taken out. Instead it can be one from their home library.

Bingham’s fellow classmates joined her brother Lincoln’s first grade class at Thorsby to donate the books that will used to fill the library initially.

The books will be housed under the pavilion at Richard Wood Park and inside an old newspaper stand that Bingham found while searching on eBay.

“We chose a newspaper stand because it is durable and will keep the books safe from the elements,” Bingham said.

The students also helped paint the outside of the stand with bright colors so that the library will maintain a visible presence at the park.

“I’m really happy that we did it, so that kids won’t lose reading,” Grace Bingham said.

Bingham already has an eye one specific book that she wants to read first.

“There is an octopus book,” Grace Bingham said. “It looked like it had some great stuff in it.”

The park’s location is centrally located and is also at a popular place for kids to be during the summer.

The library will remain at the park beyond the summer and into the next school year as Bingham hopes it will become a “park fixture.”

“We wanted to engage kids,” Bingham said. “While at the park playing, kids are using imagination, and we wanted to build on that.”

By Neal Wagner | Shelby County Reporter A 33-year-old Jemison woman is facing up to 10 years in prison after... read more