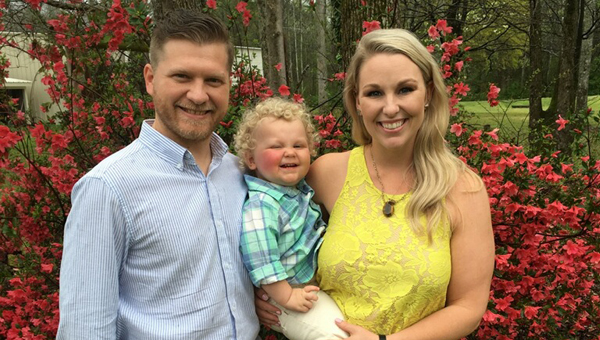 The Penleys were at Tiffany’s mother’s house in Jemison on the afternoon of May 14 preparing the property for a party to celebrate Micah turning 2 years old on June 30.

Everyone knew the danger of a toddler being around a pool, but with four adults around, there was little worry.

But before anyone noticed, Micah slipped off and somehow fell into the pool.

Penley’s mother, Greta Schoolar, went into the house to grab a pair of work gloves and noticed Micah’s arms in the pool when she came back out.

“I’ve heard her scream his name a million times because she’s his grandmother and she’s very protective, but I knew when I heard her that something wasn’t right,” Penley said.

When they pulled Micah out of the pool, Penley said the child’s skin was blue, and he was bloated with water.

“He was dead,” Penley said. “It looked like he had been there for a day. It was horrifying.”

“I grabbed him and laid him on the deck and started doing chest compressions,” she said. “I had no idea if I was doing it right.”

Meanwhile, Jeremiah Penley and Jimmy Schoolar were in Schoolar’s truck but rushed to the scene after seeing Tiffany Penley running to the pool.

Jeremiah had experience as a lifeguard, had received some emergency training during his time in the Marines, and he was recently re-certified for CPR through his employer, Energen. So, the father was confident he could do all that could be done until an ambulance arrived.

Tiffany Penley ran to the front porch to grab her phone and call 911. In her state of panic, she fell several times but was able to call. Jimmy Schoolar was already on the phone with 911, but Penley said for some reason she could not hang up the phone.

“I don’t know what all I was screaming, but I was just crying out to God,” she said.

Jeremiah Penley was pleading for Micah to come back, and all of a sudden, he did.

“His eyes just popped open, and he started throwing up,” Tiffany Penley said. “He started getting his coloring back. It was amazing how quickly he started to turn around.”

The Schoolars live at the end of a long driveway, so the family met emergency responders at the end, off County Road 71 in Jemison.

Micah was conscious but mostly unresponsive during the ambulance ride to Children’s Hospital, where he was checked over.

“They were amazed that there wasn’t an ounce of water in his lungs,” Penley said. “There was no brain damage or anything. It was as if nothing happened. It was so amazing. It was an absolute miracle.”

After the family was moved to a room, Micah began playing rambunctiously—acting like his old self.

Micah and his family stayed at Children’s until the afternoon of the next day to make sure there were no lingering effects, and then he followed up with his pediatrician.

To everyone’s joy and amazement, there were no problems.

The Penleys look back on the traumatic experience with a sense of relief and thankfulness for a number of factors that helped them avoid a tragedy—Micah’s grandmother seeing him when she did, there not being a cover on the pool to trap in the boy, him not sinking to the bottom of a murky pool so that he would have been hard to find, Jeremiah’s training in CPR, and the response of emergency personnel.

But Tiffany Penley believes they also had a lot of help.

Petals from the Past kicks off harvest season with…