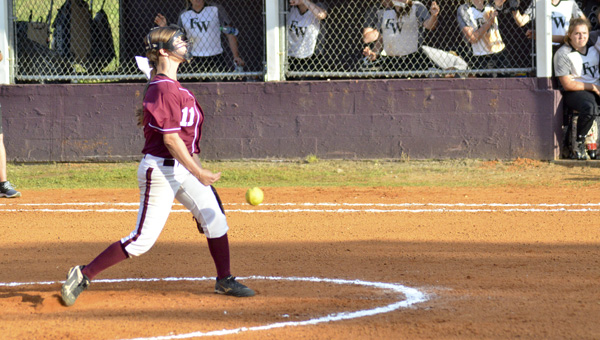 Taylor McManus of Thorsby High School fires a pitch during Game 1 of the area championship series against Fayetteville on Tuesday. McManus started each of the Rebels’ tournament games. (Anthony Richards)

Thorsby’s varsity softball team secured a playoff berth but will have to travel after losing 9-6 and 8-4 to Fayetteville on May 3 to finish runner-up in Area 9-2A.

The Rebels entered the area tournament as the top seed. However, they were unable to cash in on the home field advantage.

Thorsby grabbed the early lead in the second inning of Game 1 following a two-run double to center field by Karli Kincaid.

After starting pitcher Taylor McManus surrendered a run in the top of the third, she responded in the bottom half with her second home run of her softball career on a solo shot over the left field fence.

McManus is a senior and waited her entire career for her first home run and now has hit a pair in a two-week span.

“The second time I just felt it,” McManus said. “I wasn’t in tears that time, but it was just pure joy.”

The Rebels led 3-1 after three innings of play.

Fayetteville continued the back-and-forth affair with another run in the top of the fourth inning and was looking for more.

However, McManus fired a relay throw home, and catcher Ashley Cleckler tagged out a potential tying run at the plate.

Fayetteville took control of the game’s momentum in the fifth inning as a two-run double, fielding error and sacrifice fly led to four runs.

Once again, McManus responded at the plate with an RBI single that scored Adi Niamon and cut the deficit to two runs.

Thorsby’s outfielders showcased their arm strength on several occasions throughout the game, as Sabrina Ellison and Lauren Reeser each contributed in throwing out runners at the plate.

Errors and throws just off the mark hurt the Rebels as the game wore on. Fayetteville took advantage with three more runs over the final two innings.

Reeser lifted a home run to straight away center field, as the Rebels added a pair of runs, but the damage was already done in Game 1.

A year ago, Thorsby upset host Fayetteville to win the area. This time around, the roles were reversed entering Game 2.

“Everybody up and down the lineup has got to find ways to contribute,” Robinson said.

McManus started Game 2 of the area championship, her third game of the day.

“She’s used to that, and we’ve just got to play good defense behind her,” Robinson said prior to Game 2.

Though the momentum was in Fayetteville’s favor, Robinson was hoping the No. 1 seed and Fayetteville playing its fourth game of the day would be a factor in the outcome of Game 2.

However, it proved to be much of the same as Fayetteville won 8-4 and Thorsby could not claim yet another area title.

Shot fired into vehicle on I-65, police search for suspect

Gun shot: An apparent gunshot caused a hole on the outside and inside of a vehicle as it traveled south... read more