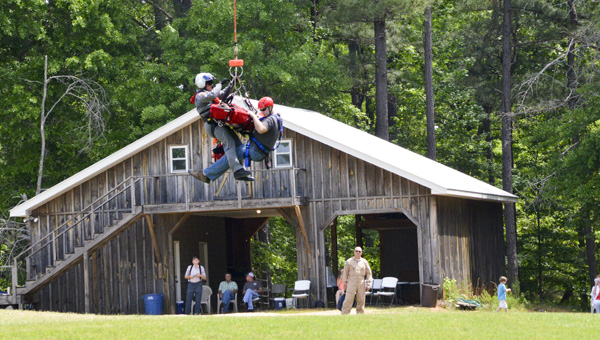 The West Chilton Fire Department teamed up with Alabama State Troopers and hosted an aviation training exercise on April 29.

“We like to cross-train with various agencies,” West Chilton Fire Chief Derek Abernathy said. “It teaches us what to expect, so that we can handle any situation that arises.”

The exercise focused on aviation techniques that can be used in the event that a local fire department must call for the aid of a helicopter during an emergency call.

Jemison, Verbena and Brierfield fire departments took part in the training process along with West Chilton.

“We train throughout the year with various agencies in the state,” Alabama Law Enforcement Agency pilot Shane Hobbs said. “We try to get the word out that this is a service that we are willing to provide free of charge.”

The use of a helicopter provides added efficiency for each individual involved in the process.

According to Abernathy, the helicopter provides the ability to access people in need of help and in the middle of the woods or other tough to reach places.

“A lot of agencies do not know that there is a helicopter available to them if they need it,” Hobbs said. “Trying to haul the person out puts firefighters and rescue personnel at an even greater risk.”

Abernathy recalled a situation several years ago that involved a man that had gotten shot while deer hunting. The fire department had to carry the wounded man out of the woods.

The helicopter is based at headquarters in Montgomery with satellite bases in Coleman and Fairhope.

“We’ve responded to some that would have taken hours to get out; instead it took 15 to 20 minutes,” Hobbs said.

A safety briefing was given prior to the training to go over details about the equipment and procedures that were used.

“This was not an every day training exercise for us,” Abernathy said.

West Chilton plans to perform aviation training in conjunction with state Troopers at least once a year moving forward.