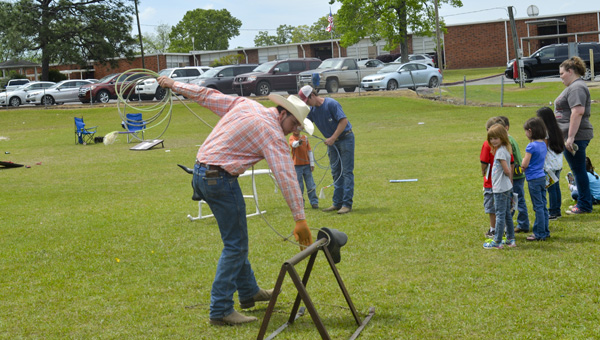 Thorsby High School held its third annual “Farm Day” on Wednesday for students in kindergarten through the sixth grade.

There were a variety of booths on display that educated the possibilities that exist in the world of agriculture.

“The importance of today is that not even 1 percent of our population is in agriculture production,” Thorsby Agriculture teacher Brian Lucas said. “These kids are the future.”

“How do you know if you’re interested in something if you’ve never been exposed to it,” Lucas said. “It starts at an early age.”

According to Lucas, the officers of Thorsby’s FFA organized the event by contacting vendors and helping plan out the day’s schedule.

“You get to experience the business side of it as well,” Thorsby Chapter President Carson Littleton said.

Thorsby’s FFA members operated the majority of the booths and also helped guide the children through the event as group leaders.

“We are trying to pave the way for them,” Littleton said. “I’ve been part of it each year, and it’s always fun to watch the kids get so engaged.”

Sophomore Aniston Bolding helped out at the cattle booth.

According to Bolding, the goal of the exhibit is to help kids understand where the things they use on a daily basis come from.

“The FFA opens a ton of doors,” Bolding said. “You don’t have to just work with cows.”

A pair of seniors, Michael Patterson and Lane Smith, put on quite a display as they taught kids the technique required at the roping exhibit.

“You can live an easier life if you don’t have to depend on someone else to grow your food,” Patterson said.

The event has continued to grow during its three years, with even bigger plans for the future.

Abby Cleckler of Thorsby hustles down the first base line on a sacrifice bunt, as she attempts to beat out... read more