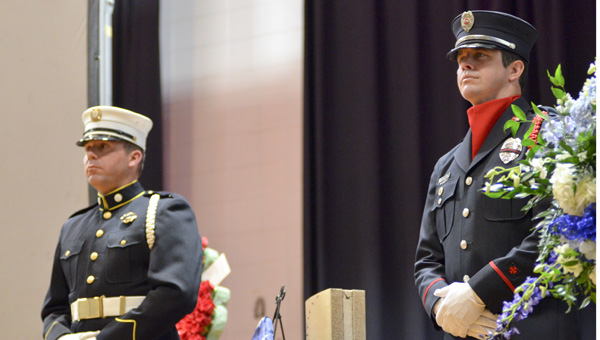 Friends and family gathered Friday at Jemison High School to honor the life and service of Jason Snipes, who was killed March 26 in a Haynes LifeFlight 2 crash. (Photo by Emily Reed)

Friends and family of Jason Snipes gathered Friday at Jemison High School to honor his life and commitment to serve other people.

“Jason deeply cared about the community he served,” said Chris Heisler, founder of the U.S. Honor Flag and president of The Honor Network.

Heisler officiated the memorial service held in the auditorium at JHS.

Prior to the service, emergency personnel from Chilton County and surrounding counties led a procession from Montgomery to Jemison along Interstate 65 and U.S. Highway 31 to pay tribute to Snipes.

“After talking with friends and family members, I found out that Jason was a man who didn’t do things for himself, but for others,” Heisler said. “He was very well-respected his entire life.”

Heisler explained the Honor Flag honors heroes who “made the ultimate sacrifice.”

“It is one flag for all of our heroes, and it has continued to travel from place to place,” Heisler said.

The flag was gifted by the Texas House of Representatives shortly after the Sept. 11, 2001 attacks and is used to pay tribute to those who have lost their lives in the line of duty.

Snipes, 34, of Verbena, was one of the members of Haynes LifeFlight 2 that died March 26 in a remote area of Coffee County.

The LifeFlight crew was transporting a victim who had been injured in a motor vehicle accident to a Montgomery hospital when the chopper went down.

The patient was also killed during the crash.

Snipes was a 1999 graduate of Jemison High School and previously worked at Regional Paramedical Services, volunteered with the North Chilton Fire Department, and also worked for CARE Ambulance as an EMT.

Snipes was volunteering for the Verbena Fire Department at the time of his death.

Pastor Jason Kelley spoke about Snipes’ love for the outdoors and told those in attendance that Snipes loved to ride bikes, cut grass and go to the river with friends and family.

“He loved serving others and had made a decision at an early age that he was going to serve those around him,” Kelley said. “As I look around today, I see so many friends and family, and I can’t get over how many people cared about him.”

Katelyn Patterson sang “Heaven was Needing a Hero,” and Pastor Billy Wyatt spoke about Snipes’ willingness to love others and serve them.

“He was a great guy and had a genuine love for people,” Wyatt said. “He had made a commitment to help so many.”

Ross Terrell with Haynes spoke about hiring Snipes to work for Haynes.

“Jason showed up for his interview very early,” Haynes said. “Prior to meeting Jason, I didn’t really know much about him so I reached out to people in the industry to find out what I could about him. They all said the same two things that Jason was an ‘awesome paramedic’ and a ‘great guy.’ Jason would often say he wasn’t a hero, but that God worked through his hands. He loved making a difference, and he wanted to work. He was an incredible paramedic, and he was a hero.”