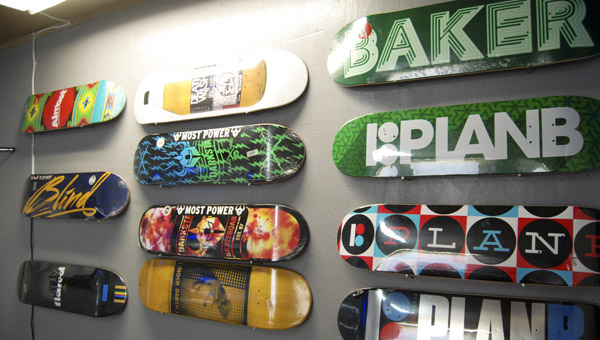 For all you thrill seekers out there, Deadman Skate Shop opened on Saturday in the heart of Clanton.

Dylan Richardson, 21, owns the shop and originally came up with the idea while living in Virginia. He created “Deadman” skate team as a result.

“It takes a lot of skill to do what these kids can do,” Richardson said. “It’s only a matter of time before skateboarding finds a place in the Olympics.”

However, he recently accepted a job in the area and brought his business idea to Clanton.

Deadman Skate Shop sells skateboards and wheels as well as accessories such as board decals. The shop looks to capture the imagination of Clanton’s younger generations.

Richardson credits his brother Cody for always pushing him to be his best and supporting his business ventures along the way.

“With us, it’s not just about the money,” Richardson said. “There are a lot of really good skaters in the smaller towns, and we wanted to try to get the word out.”

One day while walking by a skate shop as a teenager, Richardson noticed a skateboard that was for sale. It captured his attention, and he promised to stick with the sport.

“It’s not about what you can do but about how far you can push yourself to do the unbelievable,” Richardson said. “I am who I am because of that, and that’s what I want the kids to see.”

According to Richardson, skating has the ability to capture the imagination of both kids and adults.

“You can take a skateboard anywhere and do anything you want to with it,” Richardson said. “The first few people that came into the shop could not believe that it was there.”

However, there is not a park or designated area for the youth of Chilton County to skateboard.

Richardson looks to change this by starting a donation to get the process of building a park started.

“For now there’s only the streets,” Richardson said.

Deadman Skate Shop is located at 409 Seventh St. S. and is located across the road from the Valero gas station.

A grand opening is expected to take place in about three weeks with Richardson currently working out the details.

Due to Richardson having another job, the business hours are currently in flux. The shop will be open from 6 p.m. to 9 p.m. on Wednesday with someone helping operate the business. However, the majority of days the shop is expected to be open from Noon to 9 p.m.

“I’m using my own money and it’s hard, but I really do enjoy it,” Richardson said. “It truly is a great feeling.”