Members of LifeFlight 2 honored during memorial service in Troy 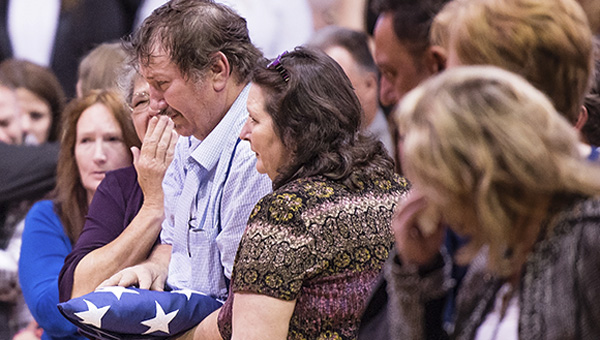 Family members of the fallen members of Haynes LifeFlight 2 receive American flags during a memorial ceremony March 31 at Sartain Hall. The crew members, Chad Hammond, Stasi Cernadas and Jason Snipes, along with patient Zach Strickland, died after their helicopter crashed in the early morning hours of March 26 in a rural area of Coffee County. Photos by Jonah Enfinger / Troy Messenger

By Jaine Treadwell | The Troy Messenger

In a place for bouncing balls, for loudly blown whistles and cheering crowds, there was only the sound of silence.

Silence prevailed until there was music—until hymns of comfort, of solace were played. “Nearer My God to Thee.” “Jesus, Savior, Pilot Me.” Heads were bowed in reverence. 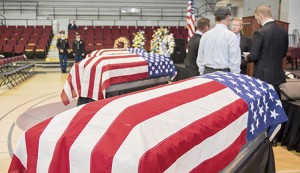 The lives of the Haynes LifeFlight 2 were honored during the memorial service.

In the distance, a siren sounded, as if a reminder of why people had gathered on a cloudy, rainy March morning – “to honor three incredible fallen American heroes,” said Chris Heisler, founder of the U.S. Honor Flag and president of The Honor Network.

Hammond, Cernadas and Snipes died along with patient Zach Strickland in the early morning hours of March 26 when Haynes LifeFlight 2 went down in a remote area of Coffee County. The LifeFlight crew was transporting Strickland, who had been injured in a motor vehicle accident, to a Montgomery hospital when the chopper went down.

Troy Mayor Jason A. Reeves’ remarks were directed—first, to the families of the fallen heroes.

“I feel inadequate,” he said. “How little my words can do up against your sacrifice. Their sacrifice overwhelms me.”

Reeves expressed appreciation on behalf of the Troy community for the lives often saved by Haynes LifeFlight 2. He said flags in Troy were being flown at half-staff in memory of Hammond, Cernadas and Snipes. Reeves said U.S. Rep. Martha Roby had arranged for four flags to be flown at half-staff over the nation’s capitol in memory of those killed in the crash. 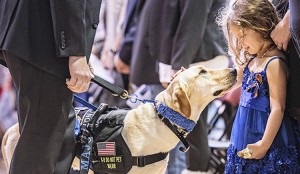 A little girl greets a service dog during the memorial service March 31.

Kirk Barrett, president and CEO of Haynes Ambulance of Alabama, said the support of the families of the crew of LifeFlight 2 has been overwhelming.

“We do what we do because we care, because we want to help others,” he said.

Barrett told about an incident where Snipes continued to express care for an accident victim that had been revived on his watch. He sent encouragement to her via Hebrews 11:1 and with the challenge to keep the faith and the knowledge that faith will move mountains.

Troy University Chancellor Dr. Jack Hawkins, Jr. said that, although he felt inadequate, he was honored to have a small role in the tribute to the fallen heroes.

“I can only imagine the pain you are going through,” he said. “The Bible tells us that unto all things there is a season—and a time to weep. You have come to that time. I have no words of real comfort.”

Hawkins quoted the Gospel of Matthew in saying “as the Son of Man came not to be served but to serve,” so did the crew of Haynes LifeFlight 2.

“We mourn their loss,” Hawkins. “They flew into the darkness on the behalf of others.

Special guest speakers Corey Pittman and Phillip Winningham had words of comfort for the family and friends of Hammond, Cernadas and Snipes.

Pittman knew Snipes and Cernadas personally. Snipes, he said, never thought of himself as a hero. He was just blessed that God worked through his hands to help others. Cernadas had a brilliant mind and a larger than life personality. Although he didn’t know Hammond personally, through others, he knew about the goodness of his character as a father, husband and son.

He spoke of Strickland and the loss his family is having to endure.

“Lives have been shattered and the loss is having an impact in every corner of this country,” Pittman said.

Winningham also had words of comfort for the families.

“Healing will come through God,” he said. “You will laugh again. God will restore the joy that was robbed from you.”

Winningham said a plaque on the wall of the Haynes’ office reads, “Rest Easy. We will take it from here.”

“Rest Easy,” he told the families of the fallen American heroes. “God will take it from here.”

“Taps” was followed by “Amazing Grace” as American Flags were folded and presented to the families of Chad Hammond, Stacy Cernadas and Jason Snipes of Haynes LifeFlight 2.

Their last call was sounded.

Again, the sound was silence.