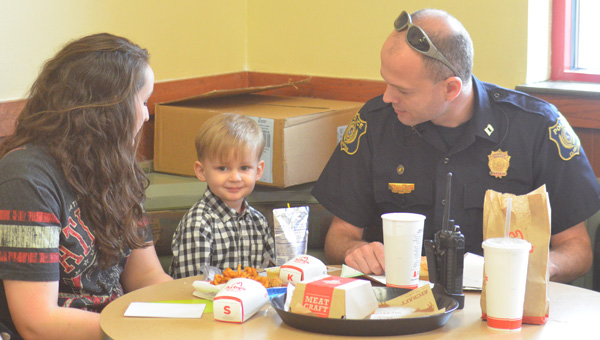 A traffic checkpoint and an order of curly fries led to a friendship between a Clanton police officer and local 3-year-old.

Clanton Police Department Capt. Neil Fetner treated Kristen Lawrence and her 3-year-old son, Carter, to lunch at Arby’s on Wednesday to repay them for an act of kindness powerful enough to remind us that positive relationships still exist between police and the community they serve.

Fetner was part of a traffic checkpoint on Monday, and Kristen Lawrence stopped her vehicle about 8 p.m. and was searching for her driver license and proof of insurance when Fetner noticed Carter waving at him from the backseat.

“He loves policemen and police cars, but he’s never talked to one,” Kristen Lawrence said.

But Carter talked to this one, telling Fetner that he and his mother were on their way to Arby’s.

“I asked the little boy if he liked curly fries, and he nodded yes with a big smile on his face,” Fetner said. “I jokingly asked him if he was going to bring me back some curly fries from Arby’s, and he grinned real big.” 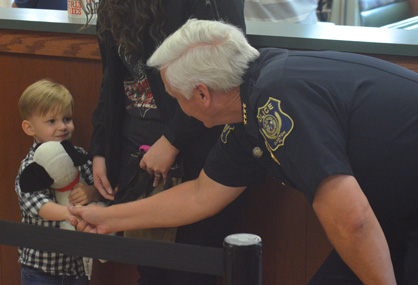 Kristen Lawrence knew her son would take the request seriously, and when they ordered their meals at Arby’s, Carter made sure they picked up an extra order of curly fries.

Carter and his mother went back through the checkpoint on their way to their home off Studdard Drive and delivered the fries to a grateful police officer.

“I was surprised,” Fetner said. “I never intended for that. It was more or less just making conversation.

“It is small things like this that make me proud to wear my badge. It is refreshing that parents are still raising their children in a positive manner. I am very happy to know that there are still people in society that appreciate the sacrifices made by law enforcement.”

The story would be a good one if it ended there, but Fetner wanted to repay the act of kindness. 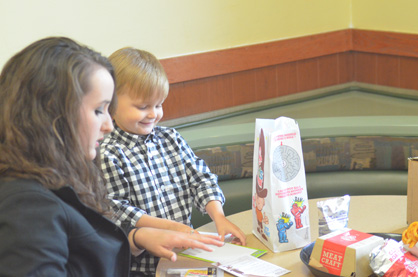 Act of kindness: Carter Lawrence insisted that he and his mother take an order of curly fries to a police officer working at a checkpoint.

Fetner posted about the incident on the CPD Facebook page in an effort to track down the young boy who had provided the fries.

Kristen Lawrence messaged CPD to let them know that her son was one the police were looking for.

“I had no idea it had gotten as big as it had,” Lawrence said.

Fetner, along with CPD Chief Keith Maddox, treated the Lawrences to lunch at Arby’s on Wednesday. Curly fries were enjoyed by all.

Carter was also presented with stick-on police badges, CPD Frisbees, a police tie-tack and more, including a gift certificate to Love’s travel stop, where the Clanton Arby’s is located.

After lunch, he went outside the restaurant for a demonstration of a police vehicle’s lights and siren.

“Carter had a blast,” Lawrence said. “That definitely made his day. He was so excited. He’s convinced that he’s a policeman.”

“It was a good opportunity to sit down and be a positive influence on that young man,” he said. “I hope people see these kinds of stories and know we’re here to help and not harm people.

And as for the night of the curly fries delivery? They were more appreciated than Carter and his mother may have known.

“It was a long day, and I was kind of hungry,” Fetner said.