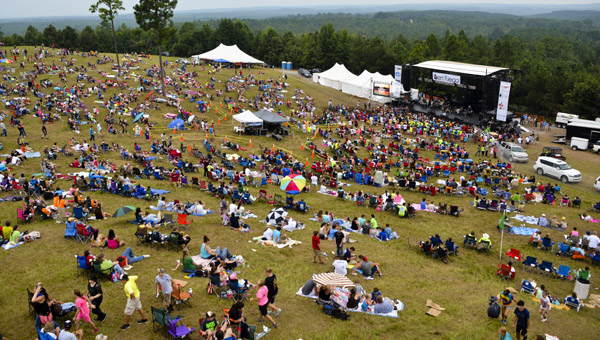 This year’s En Fuego Christian music festival will be the 20th. The festival is held each August in Verbena. (File Photo)

For the past 20 years, “En Fuego” has been spreading the gospel message through music and fellowship.

The 20th anniversary of the Christian music festival in Verbena will be held this year on Aug. 27 with the schedule of guests to be released April 11.

“I don’t think anybody had any idea that we would still be doing it 20 years later,” En Fuego board member Sherry Simpler said. “It’s always special, and you can tell how much it means to us.”

Simpler has been involved with the event since its inception along with a handful of others such as fellow board member Johnny Giles and has seen first hand how the celebration has grown through the years.

“It started out with a couple of flat-bed trailers pushed along side each other and feeding hot dogs off the trailers,” Simpler said. “There had not been anything done like this in the area.”

An admission fee of $5 was charged during the early years to help cover the cost of holding the event. As the event continued to grow, it eventually became free to the public after a handful of years.

En Fuego exploded with 5,000 people that showed up the first year it was available for free which also happened to coincide with more recognizable bands scheduled to play.

“We always wanted it to be free, because we didn’t want to charge to put the gospel out there,” Simpler said. “We trust that God is providing.”

The largest attendance was recorded during the 10th anniversary in 2006 with “Third Day” highlighting the list of bands that year, Giles said.

Both Simpler and Giles credited Travis Crim as a founding member of En Fuego and an influential force in establishing the event.

He is currently a writer, producer and creative producer in Los Angeles but has remained a part of the event and continues to come back each year.

“The community has really taken it under its wings,” Giles said.

According to Simpler, preparation for the event is almost a year-long process, with meetings taking place for the upcoming year just over a month after the event.

The difference in this year’s event will be the lack of an extended opening act. Instead, the more recognizable performers will begin playing at an earlier time.

“As soon as it starts, it will be wide open with great artists,” Simpler said.

En Fuego is held at 2701 County Road 23 in Verbena just before crossing over from Chilton County into Elmore County.

“We were hoping to have the schedule released, but had to push it back,” Simpler said.

Though the event focuses on spreading the gospel message to kids, people of any age have been known to benefit from the festivities.

“It is a pretty good mix of people and often times entire families will come,” Simpler said.

According to Simpler, Chilton County law enforcement has provided great support over the years in helping with security and the flow of traffic.

The intention was originally to offer a day to find God and allow an opportunity to reflect upon one’s life.

For more information about En Fuego, visit www.enfuegoinfo.com. Forms can be found on the website to fill out for volunteer and counselor opportunities.

Ten bridges in Chilton County, included this one on Highway 155 in Jemison, are planned to be replaced. (File Photo)... read more