Sides, 72, said she decided to compete in the pageant after Senior Connection members suggested she enter. 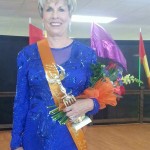 “I have never entered a pageant before in my life,” Sides said. “A few of the girls from here were talking to me about the pageant and kept telling me I should enter. I decided to and had so much fun.”

This is the second year Senior Connection has hosted the event after Walter Hayden helped revive the pageant in 2015 and has served as director both years.

The pageant is for ladies 60 and older and is a preliminary for the Ms. Senior Alabama pageant.

Contestants competed in interview and a formal wear portion and talent.

Sides said she chose a “fast” line dance to the LeAnn Rimes song “I Want To Be A Cowboy’s Sweetheart.”

“The judges made you feel so comfortable,” Sides said. “Everyone was helping everyone, and you never felt like you were doing it by yourself. But all of the contestants were in it to win it.”

This year’s contestants were Lucy Binion, Judy Headley, Elizabeth Kew and Sides, who are all Senior Connection members.

Binion was chosen as the alternate.

The event was held at the Senior Connection building located at 304 Park Plaza in Clanton.

Sides will be sponsored by Senior Connection to compete Aug. 5-6 in the Ms. Senior Alabama pageant at Wallace State Community College in Hanceville.

“I am excited about getting to go to state,” Sides said. “I am going to face this as a challenge and hopefully I can make the people of Chilton County proud.”

Senior Connection Director Vanessa McKinney said the pageant this year had good participation, but hopes the pageant will grow in the future.

“We would love to see more people participate,” McKinney said. “Everyone has a great time, and those that do compete get really into it.”

Sides also said she hopes more women will decide to compete in the future.

Once in Hanceville, Sides will tackle a day-long rehearsal and a rehearsal dinner all before the pageant, where contestants will again complete an interview and a talent demonstration along with a poised demonstration of formal wear, each sharing a “philosophy on life” and on-stage question.

The winner of that pageant will go on to compete in the Ms. Senior America pageant in New Jersey.