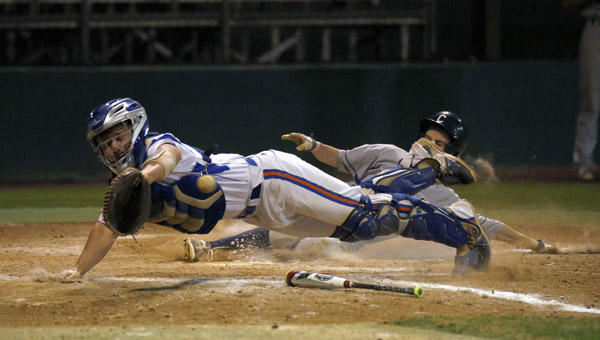 Chilton County’s Dustin Cleckler dives to corral a wide throw at home plate, as the winning run slides in safely for Calera during Game 2 of the Tigers’ spring break tournament on Saturday. (Photo by Brandon Sumrall / Special)

The Chilton County Tigers hosted what was scheduled to be a two-day spring break varsity baseball tournament on Friday and Saturday.

However, heavy rain on Thursday prevented Friday’s games from being played.

The Tigers were able to take the field on Saturday against Montevallo in Game 2 of the tournament and battled Calera in the fifth and final game.

Chilton County took a few days off for spring break and had not played a game since winning big over Selma on March 23.

The Tigers were a bit rusty from the time off, but that did not keep them from winning 10-3 against Montevallo.

Montevallo scored first and took a one-run lead in the top of the second, but Chilton County responded with six runs in the bottom of the third.

Giquon Lane and Corbin Bice scored on an error by the Bulldogs’ second baseman. Later in the inning, Jack Mosley, Dustin Langston and Keaton Sullivan all scored on another error.

Tolliver Gilliland was the sixth man to score in the inning when he hustled home following a wild pitch.

Chilton County added another run in the bottom of the fourth when Dustin Cleckler grounded out to second, scoring Hunter Bennett from third.

Montevallo plated two in the top of the fifth to draw within four runs of the lead.

In the bottom of that same inning, another Bulldogs error allowed Lane to score. Bice then followed with a single that scored both Cade Hatch and Lane, putting the Tigers up by seven.

Gilliland pitched four strong innings to get the win, striking out one and only allowing one earned run.

He was followed in relief by Eiland Cleckler and Cody Herron, as the two combined to pitch the final three innings and help give the Tigers the victory.

Chilton County returned to action later in the evening in a pitching duel against the Calera Eagles.

Calera scored first on a single in the top of the first, but Jarrett Ricks, Trever Thompson and the Tigers’ defense held the Eagles scoreless afterward until the seventh inning.

In the bottom of the fourth, Bennett scored from third on a wild pitch and tied the game at 1-all.

Facing a bases-loaded situation with only one out in the top of the seventh, the Tigers moved its infielders in an attempt to prevent the Eagles from taking the lead.

The batter slapped a ground ball to the second baseman, who tried to throw the ball home for the out, but his throw missed its mark and resulted in two runs for the Eagles.

The Tigers were unable to get anything going against Calera’s dominant lefty in the bottom of the seventh and lost 3-1.

For the Tigers, Ricks turned in yet another impressive performance. In his five innings of work, he struck out nine and only allowed one earned run.

Thompson made a brief appearance in the sixth, but was replaced in the same inning by Hatch, who pitched 1 3/4 innings and struck out two.

The story of the game was Calera’s pitcher, who pitched a complete game, allowing only one hit while striking out 16.

Chilton County will resume area play on Tuesday when it hosts Hillcrest of Tuscaloosa with first pitch scheduled for 6:30 p.m.

The Tigers are currently 2-0 in area play.