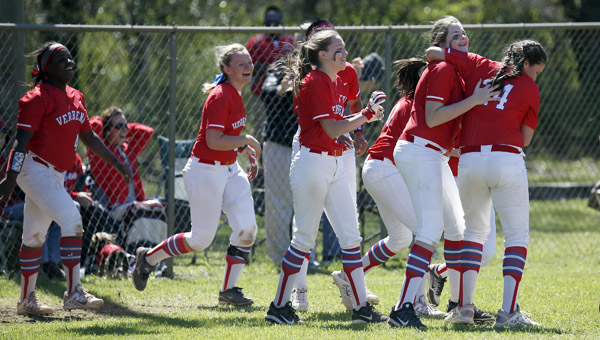 Road trips, sandy shores and relaxation are what spring breaks are made of.

However, for many girls in Chilton County, this year’s spring break was spent on the softball diamond.

Maplesville High School played host to its Spring Break Tournament on Saturday as six teams participated in a round robin format.

In order to maximize the number of games each team could participate in, the Isabella Mustangs hosted a portion of the tournament games at their field and got the day’s activities started by taking on the Paul Bryant Stampede.

Five runs in the top of the first inning by Paul Bryant were followed by a three-up and three-down inning for the Mustangs.

A scoreless second inning by both teams led to a seven-run top of the third by the Stampede, while a two-out walk to Savannah Ellison in the home half of the inning did little to help the Mustangs’ cause.

Six more runs by Paul Bryant in the top of the fourth put the Mustangs in an 18-0 deficit and facing the mercy rule if they failed to score at least three runs in the bottom half of the inning.

A leadoff bunt by Mackenzie Ratliff was the first hit of the game for Isabella with a single by Noelle Fjeldstad and a bunt by Vivian Atchison to load the bases with just one out.

An infield ground ball was fielded by the pitcher and tossed back to home to pick up a force out on Ratliff, and a strikeout brought the game to a close. 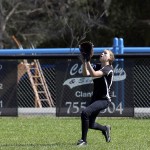 Ratliff, Fjeldstad and Atchison all picked up singles for the Mustangs while Alexia Parker handled the pitching and threw 2 2/3 innings allowing 10 hits, nine earned runs, six walks and one strikeout.

Meanwhile on the other side of town, after both teams had won mercy rule games over Central High School of Hayneville, the Verbena and Maplesville Red Devils faced off in a 10-9 thriller that was not be decided until the final out.

A one-out walk to Josey Smitherman led to an RBI single by Megan Weaver and gave Maplesville an early 1-0 lead in the top of the first inning.

Verbena answered with four runs of their own in the bottom half of the inning, as a Janiya White single got things started.

A walk to Makayla Mims gave Verbena two on with one out, and Chelsea Ray doubled to score White to tie the game at 1-all.

Mims scored on a wild pitch, and after a walk to Candice Williams, Ray scored as well on another wild pitch.

An RBI single by Jenae Pierce brought home Williams to give Verbena a 4-1 lead after one inning of play.

The Verbena lead was short lived as Maplesville picked up six runs in the top of the second to take a 7-4 lead.

The offensive spurt was fueled with walks to Bailee Connell and Arin Girlie along with a single by Lacee Wallace that loaded the bases for Maplesville with no outs.

Connell scored on a wild pitch and Smitherman connected for an RBI single to score Wallace.

Allison Jones tripled to clear the bases as Amy Fletcher and Smitherman came around to score.

A three-up and three-down inning for Verbena in the bottom of the second inning kept the score the same going to the top of the third.

A leadoff walk to Brinley Carter set up another Maplesville run on a wild pitch to extend the Maplesville lead to 8-4.

Maplesville tacked on one more run in the top of the fifth inning when a one-out walk to Alyssa McGee gave Maplesville a 9-4 lead after yet another wild pitch.

With a five-run deficit and down to their final six outs, the Verbena comeback began in the bottom of the fifth.

Ray reached base thanks to a Maplesville error and after a ground ball out. Another error put Pierce aboard while also scoring Ray.

White hit an infield ground ball that scored Pierce and cut the Maplesville lead to three, 9-6.

Katelyn Green walked, and White singled to give Verbena two base runners with no outs.

Green came home on a wild pitch and a Maplesville error on a fly ball by Connell allowed White to score as well, as Verbena trailed 9-8.

Williams moved the tying run to third with a single. Williams represented the winning run with only one out.

An error on a hit by Pierce scored Ray to tie the game at 9-all, and Williams advanced to third.

The Maplesville errors began to pile up and allowed Williams to cross home plate and gave Verbena a 10-9 win.

Ray led Verbena at the plate with a 2-for-4 performance that included a single, double and one RBI.

Jones led Maplesville at the plate with a 2-for-4 performance with a single, triple and two RBIs.

Maplesville defeated Verbena 8-4 on the road on March 21 and improved its overall record to 11-2. Multiple players led... read more