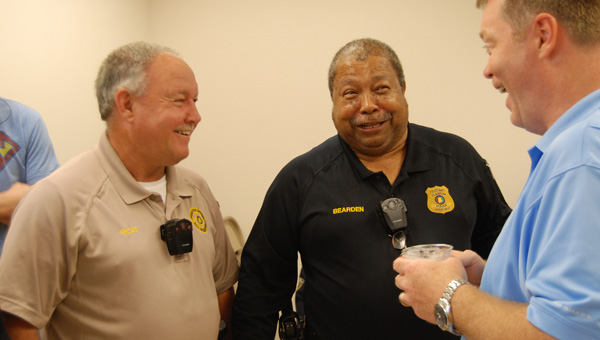 Elijah Bearden had the perfect personality for a patrol officer.

Even-tempered and with a likable personality, Lt. Bearden worked patrol for Clanton Police Department for 31 years before his recent retirement.

Bearden, who had the longest continuous tenure of any city officer, was recognized April 1 with a retirement celebration at Clanton City Hall.

About 35 people attended to show their appreciation for Bearden.

“He’s a people person, and that worked out well for him because he encountered a lot of people over the years,” said CPD Chief Keith Maddox, who has worked with Bearden for about 27 years. “We got a lot of compliments about him over the years.”

Bearden was also popular with co-workers, earning nicknames including “Preacher.”

“He’s an excellent officer and person, too,” Maddox said.

Retirement celebration: About 35 people attended a celebration in honor of Bearden at Clanton City Hall and were treated to food, cake and more.

Originally from Plantersville, Bearden started at CPD in December 1984. He received promotions to sergeant and then lieutenant, as a shift supervisor.

Maddox said a notable trait of Bearden’s was his ability to adapt in an evolving position.

“That changed everything for all of us,” Maddox said. “It gave you a different outlook on public safety.”

Bearden said he thinks the job became more dangerous over the years.

“I enjoyed it,” he said. “I had some good times, some bad times and some dangerous times, but I made it.”

An example of a dangerous incident was the time officers chased and cornered a suspect, who doused himself and the inside of his vehicle with gasoline and started a fire in an apparent attempt to harm the officers.

Though Bearden did not, two officers were injured, in addition to the suspect.

“I’ll never forget that,” Bearden said of the incident that occurred in the 1990s.

Bearden was named CPD Officer of the Year in 2008, but Maddox said he could have been the recipient of the honor any year during his tenure.

Bearden will continue to work at CPD on a part-time basis, primarily with the municipal court.

Bearden said he will also devote more time to his family barbecue sauce business, Mama Helen’s, while carrying fond memories of his time with CPD.