According to Vickie Smith, wife of Athletic Club President James Smith, an estimated $6,000 to $7,000 was raised during the event.

The total was higher than the amount raised in 2015. 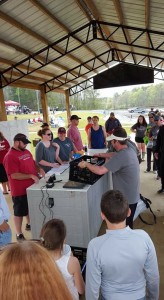 The weigh-in area was a popular place for both fishermen and spectators during the Maplesville Athletic Club Fishing Tournament on March 26. (Contributed Photos)

“We went in just wanting to see it continue to grow,” Smith said. “It went really well.”

Shane Horton and Scott Crittenden grabbed first place among the 66 boats that entered the tournament with fish that weighed in at 21.49.

The “no-weight pot” was $165, and Wendell Smith was the winner after being chosen at random.

Smith thanked all of the volunteers and fisherman that came out to make the event a success.

Editor’s note: Below is a compilation of the statistics and achievements for graduates of Chilton County area schools who now... read more