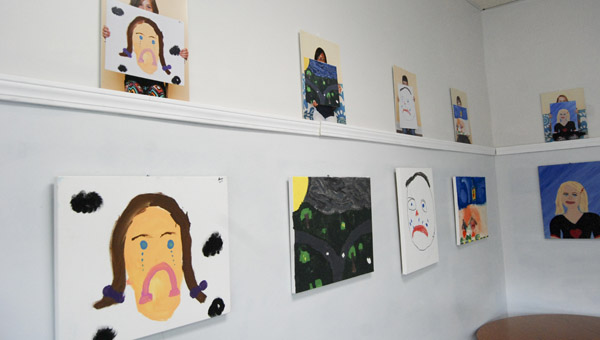 Paintings from 20 children line the walls of the Rose Gallery during April in conjunction with Child Abuse Awareness Month. (Photo by Anthony Richards / Advertiser)

Butterfly Bridge Children’s Advocacy Center has partnered with the Arts Council to showcase paintings from 20 children throughout the month of April.

According to Arts Council President and Rose Gallery Director Sue Anne Hoyt, many people have thought that the artwork was completed by children who have been abused, but that is not the case.

The concept that Butterfly Bridge Executive Director Jana Zuelzke had was that the children would empathize and show how they thought it would be to be hurt through their art.

Children that participated ranged from 3 years old to 15 years old, male and female.

“They all took a little bit different approach, which is what it’s all about,” Hoyt said. “Some of the images are pretty powerful.”

Making children aware at such a young age is something that Hoyt believes can only have a positive aspect on society moving forward.

“Parents and grandparents talked with the children prior to doing the artwork,” Hoyt said. “It’s a chance to discuss (child abuse) and understand that this is going on. It is a heartbreaking thing.”

Hoyt teaches a children’s art class on Monday nights and was asked why the paintings were all so sad by one of her students.

The exhibit looks to capture that feeling of emotion in both children and adults who view the artwork.

“Art is tied in with life through expression and creativity,” Hoyt said. “I believe that everybody is creative in different ways and we just try to encourage and facilitate that.”

The exhibit received plenty of support during its preparation from Arts Council member Wes Cunningham who built a bridge as a window display and volunteer Alisa Lynn who took photographs of each of the children that are represented with their specific painting.

According to Hoyt, the Arts Council likes to display exhibits that have the opportunity to promote a good cause.

“Part of what we look to do is working with the community to help give back to those organizations,” Hoyt said.

Ten bridges in Chilton County, included this one on Highway 155 in Jemison, are planned to be replaced. (File Photo)... read more