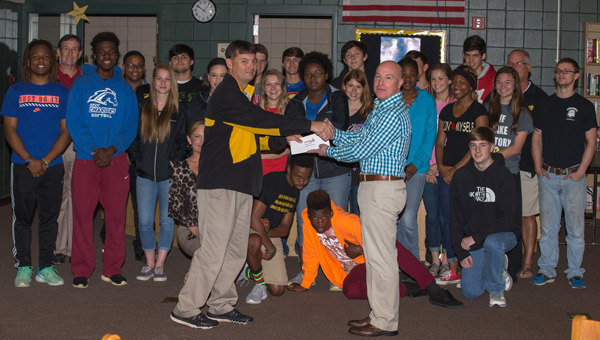 Van Forrester (left) of Alabama Power presents Billingsley Athletic Director Tyson McLean and the Billingsley track team with a check for $2,500 thanks to the Alabama Power “Power to Play” program. (Photo by Brandon Sumrall / Special)

Athletic Director Tyson McLean and the Billingsley track team were presented a $2,500 award by Van Forrester of Alabama Power on March 31 as part of the “Power to Play” program.

Raising funds for any activity has become tougher for every school no matter the cause, with the government regulating the type and amount of fundraisers that a school can participate in.

For the second consecutive year, Billingsley High School has found a way to take advantage of every opportunity to help fund its athletic programs.

Alabama Power’s “Power to Play” program was first introduced in 2014 and has awarded a total of $80,000 to 32 schools across Alabama.

Billingsley has been fortunate to receive the award in consecutive years as the Bears’ softball program picked up one of the 32 awards last year.

The grant came at an important time for the softball program after being a victim of theft that left the program without many of their essentials.

“We knew about the program, and last year the need was for softball,” McLean said. “This year when it come time to apply, we figured the biggest need was for track.”

With track and field being a sport that does not bring in much money, the need of funds for equipment and entry fees will be aided greatly by this award.

“We have a lot of equipment that we need,” McLean said. “We have already bought a couple of new javelins, a couple of new shot puts and disc. We need some hurdles and a few other things, and along with entry fees and travel it adds up real quick.”

With a meet coming up in Demopolis in the coming weeks, the Bears have fought some tough competition so far this season and have performed well.

“We have done well. We have had some guys that have placed and done fairly well in some events,” McLean said. “There are some things that we need to work on, and we’re just trying to get a little better. When we get down to competing against other schools our size, I hope that going to some of these bigger meets help us.”