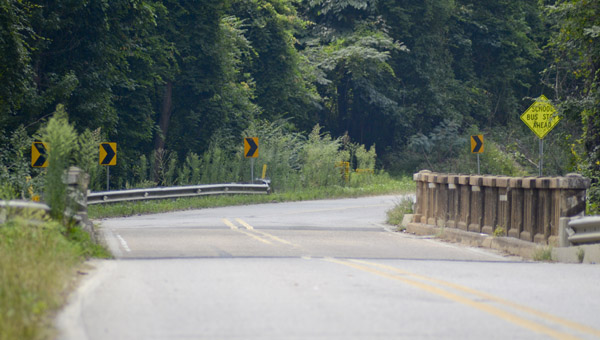 Ten bridges in Chilton County, included this one on Highway 155 in Jemison, are planned to be replaced. (File Photo)

Ten Chilton County bridges are on the docket to be replaced in the coming months.

The projects were detailed during a Heart of Alabama Rural Planning Organization on Monday at Jemison City Hall.

The two most-traveled bridges on the list are on state routes: one over a railroad on Highway 155 and one over Waxahatchee Creek on Highway 145.

The projects listed above are part of the Rural Assistance Match Program.

“These eight bridges are part of that federally-funded program,” Chilton County Engineer Tony Wearren said. “It is a very unusual circumstance, and probably at no other time would we have access to funds to replace eight bridges.”

The cost of the eight RAMP bridge replacements will range from $168,000 to $530,000 with expenses paid for by federal and state funds.

“We have been working on those [bridge projects] for about two years getting them through the process with [Alabama Department of Transportation],” Wearren said.

“We are using ALDOT standard pre-cast bridges,” Wearren said. “All the bridges will pretty much be the same with most all of them replacing wooden structures. Once these bridges are installed, they will be good for any kind of vehicle to drive over.”

The new bridges are expected to last 30 to 40 years before another replacement is needed.

“We have 100 bridges in the county, and we are getting to the point where bridges are not the limiting factor on any road,” Wearren said. “That becomes a win-win [situation] for everybody in a county like ours with so many rivers and streams.”

ALDOT will set the schedule for the bridge projects and has a tentative projection for some of the bridges to be contracted in June with the others to follow in August.

At that point, other considerations must be addressed, including securing rights-of-way, before construction can start.

A Verbena business is working to raise money for the families of those who died in a helicopter crash in... read more