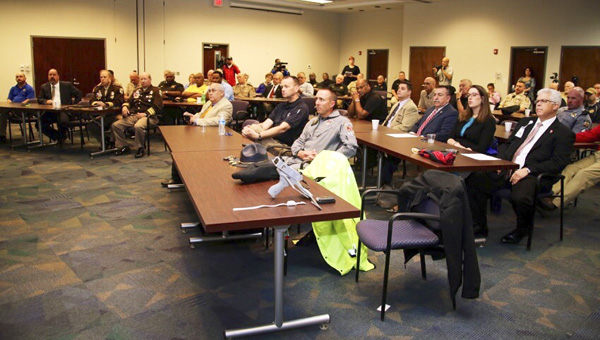 Sheriffs offices from across the state and other law enforcement agencies met at Alabama Power in Clanton to go over details and the importance of Project Lifesaver. (Contributed)

Sheriffs offices from across the state and other law enforcement agencies met at Alabama Power in Clanton to go over details and the importance of the program.

Project Lifesaver provides a timely response to help save lives of individuals who wander due to Alzheimer’s, autism or other cognitive conditions that lead to wandering.

Individuals involved in Project Lifesaver wear a bracelet that transmits its own radio frequency. 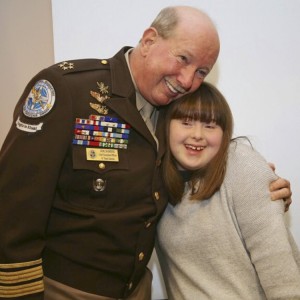 The bracelets are waterproof and resemble a plastic wristwatch on a band similar to a hospital band.

Fitting clients with special bracelets that transmit a “ping” enables specially trained State Troopers and other law enforcement officers to use handheld antennas to locate lost individuals of all ages.

Secretary of Law Enforcement Stan Stabler spoke during the program and said Project Lifesaver was a vital program.

“Our Aviation Unit has worked tirelessly to reach this milestone and to ensure Project Lifesaver is available in all 67 counties in Alabama,” Stabler said.

Cpl. Kent Smith of ALEA’s Aviation Unit is the statewide coordinator for Project Lifesaver and said he could not thank everyone enough for being at the event on Thursday.

“This program has been very successful,” Smith said. “The numbers are increasing of bringing loved ones home.”

Smith said transmitter bracelets have been placed on men, women and children who suffer from Alzheimer’s disease, Down syndrome and autism.

Gene Saunders founded Project Lifesaver and said the program is now in 48 states.

“We wanted this to be a service organization that gave back to the community,” Saunders said. “If a person is missing, it becomes personal. It is then a mission to locate that person.”

Dana Cottingham of McCalla and her family attended the event and shared details of a tragic event that happened in their family.

Cottingham, alongside her husband, Ken Cottingham, spoke about losing their son Holden just after his third birthday in 2013.

Dana Cottingham said Holden had been diagnosed with autism when he was 2-years old and found a way out of their house by opening the dead bolt to their front door.

Holden climbed a 5-foot fence and fell into the swimming pool at the family home, and by the time family members found him it was too late to save him.

“One of the worst things that I have ever had to do is zip my child’s body up in a body bag,” Cottingham said. “I want to use my story to warn other parents that it only takes one time for something like this to happen. Project Lifesaver is so important.”

Bama Hager with Autism Society of Alabama also spoke and said her 16-year-old son has autism.

“Children and adults with autism tend to always wander toward water,” Hager said. “If someone with autism ever goes missing, you should always check to see if there is water nearby. The number of children being diagnosed with autism continues to rise, and it is very important to have a program like Project Lifesaver in place.”

Josi (right) is a special needs dog that uses the company of her brother Jaks (left) to help guide her... read more