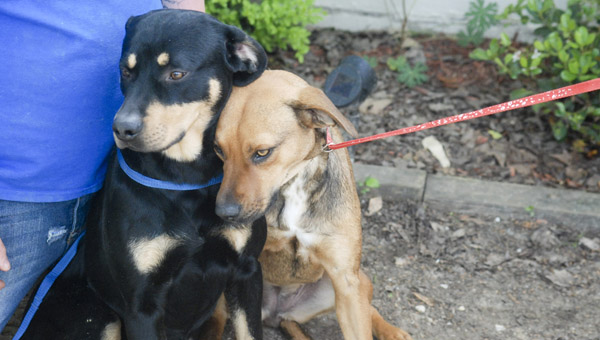 Josi (right) is a special needs dog that uses the company of her brother Jaks (left) to help guide her through everyday activities. (Photo by Anthony Richards / Advertiser)

The bond between siblings can be strong-even for dogs.

Josi and Jaks are 1-year-old Rottweiler-mixed breeds that are proving that fact.

Both dogs have been at the Chilton County Humane Society since March 2, after their previous owner had voluntarily donated them due to the fact that they did not have room in their new residence.

According to Katherine Reece with the Chilton County Humane Society, Josi is considered a special needs dog due to a “slight head tremor” that she has had since birth.

The tremor is not believed to be life threatening but has created a neurological disorder that has made life difficult for Josi without Jaks by her side.

According to Reece, Josi gets very anxious when she is by herself and is known not to eat or drink unless Jaks is around.

Jaks provides a calming presence that allows Josi to live her life as any dog would.

Due to the tremor, Josi often tilts her head to the side and oversteps at times while walking.

“She functions beautifully as long as she has her brother with her,” Reece said. “It is common for animals with disabilities to latch on to another animal.”

Because of Josi’s situation, the two dogs have been deemed unable to be separated and the shelter is asking for both dogs to be adopted together.

“From everything that we have experienced they have been great dogs in encounters with humans and other dogs,” Reece said.

Josi and Jaks are each house-trained and are heartworm negative.

According to Reece, the shelter environment can be stressful on dogs and their true character may not be reflected until they adapt to a more natural setting two or three days after adoption.

“They are used to human companionship, but have been deprived of that except for the staff members with the humane society,” Reece said. “They need that human connection.”

For more information about Josi and Jaks and the adoption process, contact the Chilton County Humane Society at (205) 755-9170.

Interstate 65 resurfacing on the horizon

Resurfacing projects will be a common sight for those traveling on Interstate 65 in Chilton County over the next two... read more