A Chilton County man who was part of the medical flight crew who died March 26 will be honored during a memorial service on Thursday in Troy. 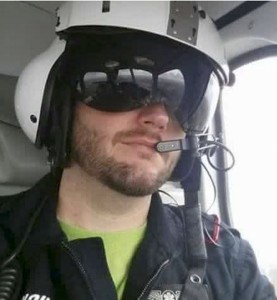 Flight medic Jason Snipes, 34, of Verbena, died March 26 in a helicopter crash in a remote area of Coffee County.

Flight medic Jason Snipes, 34, of Verbena, died alongside pilot Chad Hammond, flight nurse Stacey Cernadas and patient Zach Strickland when the Haynes Life Flight helicopter they were in crashed in a remote area of Coffee County.

The group was transporting Strickland, who had been injured in a motor vehicle accident, to a Montgomery hospital.

The incident is still under investigation, but authorities have said weather may have been a contributing factor to the crash.

A memorial service for all of the individuals involved in the crash will be held at 11 a.m. Thursday at Sartain Hall on Troy University’s campus.

There will also be an honor service held for Snipes in Chilton County at a later date.

As news of the crash circulated, those who knew Snipes described him as someone who died doing what he loved.

“Jason’s dream was to be a flight medic,” said longtime friend Christy Holcombe. “When he got offered the position with Haynes Life Flight, he was kind of nervous but so excited. He truly always wanted to help others. He cared about every patient as if they were family and would even check in on his patients when he could. He truly loved what he did.”

Holcombe grew up with Snipes, and the two graduated together from Jemison High School.

“We have known each other our whole lives,” Holcombe said. “We talked quite frequently. We worked together at Regional Paramedical Services, and he also volunteered with the North Chilton Fire Department. He had also recently joined the Verbena Fire Department, and he also worked for CARE Ambulance before leaving to work for Haynes.”

“Jason was a great guy,” Watley said. “His dream was to fly on a helicopter and do as much for his patients as he could. He died doing what he dreamed of doing his whole life. His brother died at a very young age, and his mother said when that happened Jason said he wanted to be a paramedic because he wanted to save as many lives as he could. I definitely believe he accomplished that goal.”

Watley said Snipes was one of two firefighters in Chilton County to have certified search and rescue dogs when he volunteered for North Chilton Fire Department.

Snipes owned Bella, a Labrador retriever that helped in search and rescue missions.

Watley said Snipes worked for RPS and later went to Hale County to work for a couple of months.

In 2013, Snipes heard about an opportunity to return to Chilton County to work for CARE Ambulance.

“He wanted to return to his hometown and serve his county,” Watley said. “He ultimately wanted to fly though. When he heard about the opportunity with Haynes, he wanted to take that job, but also try to work at CARE on his off days. They wouldn’t allow that, so he was the only person I have ever known who cried when he had to quit.”

Holcombe said Snipes always posted Hebrews 11:1, “Now faith is confidence in what we hope for and assurance about what we do not see,” on social media accounts as a Bible verse to share with others.

“His compassion for people was amazing,” Holcombe said. “He genuinely cared for everyone, and was one of the most amazing people you will ever meet.”