Wes Prewett has become a local celebrity in recent days after a photo began circulating on social media of him and a huge alligator snapping turtle. 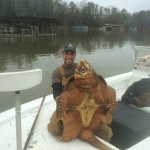 Wes Prewett poses with an alligator snapping turtle that he caught on March 4 in Blue Creek. (Photo Contributed)

The turtle was found on the end of his “limb line” on March 4 in Blue Creek.

Prewett took the boat to the nearby house of Danny Jones, owner of Durbin Farms, where Prewett works.

From there, Jones snapped a photo of Prewett in the boat with the turtle that people have since passed around on social media.

Jones estimated that the turtle weighed close to 200 pounds.

Though the picture was taken immediately after, it took weeks for the photo to receive views and go viral throughout the various social media sites.

According to Prewett, he lives at Blue Creek Marina and was fishing for catfish, but turtles accidently grabbing lines baited with shad are a common occurrence.

As Prewett began to pull up the line, he could feel the resistance and thought that he had hooked a log stuck on the bottom of the river.

After tugging four or five times, the turtle’s head popped out of the water. 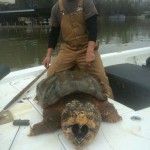 Prewett was using “limb lines” fishing for catfish when he accidently stumbled upon a nearly 200-pound alligator snapping turtle.

“He towed the boat back and forth trying to get away,” Prewett said. “I let the line go because I wasn’t sure what to do.”

Prewett realized what he had and attempted to pull it up yet again.

“I pulled him back to the surface and he presented his tail to me, so I grabbed it and flipped him over into the boat,” Prewett said.

According to Prewett, the turtle did not fight back like a fish but was instead “dead weight.”

“My whole point of getting him in the boat was to get the hook loose from him,” Prewett said.

Not sure of how long that species of turtle could stay out of water, Prewett guided his boat to the middle of the creek and released it.

According to Tom Mackenzie, media relations coordinator with the Southeast Fish and Wildlife Department, the department was looking into news of the catch.

Accounts such as this continue to add to the legend that Prewett made true with his catch and photograph.

A child was killed in a single-vehicle wreck Tuesday near Verbena. The wreck occurred at about 1 p.m. on County... read more