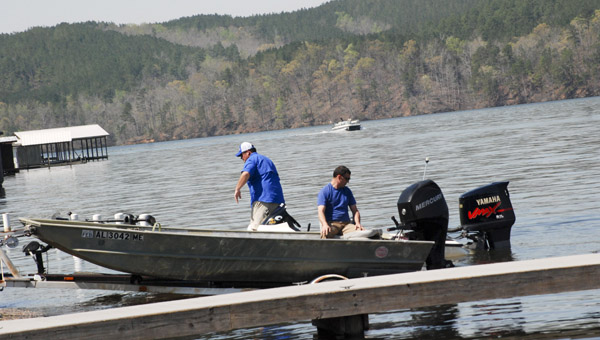 The Higgins Ferry Park boat ramp is a busy spot this time of year. Fishermen come from surrounding areas to participate in weekly tournaments. (Photo by Anthony Richards / Advertiser)

Higgins Ferry Park will be a busy place throughout the spring and summer months.

The park’s boat ramp has made it a popular spot for boaters for several years.

Three fishing tournaments were on Lake Mitchell at Higgins Ferry Park this past weekend just one week into the spring season.

According to Collum, every Saturday between 2-3 p.m. spectators can see tournament fisherman pulling their prize fish out during weigh-ins.

Collum has been in charge of operating the park since Oct. 28, 2015, and has yet to experience Higgins Ferry during the peak months of the spring and summer.

He grew up in Clanton and is fully aware of the special atmosphere that is created once the weather begins to warm up.

“I’m looking forward to it a great deal,” Collum said.

Melvin Woodruff has been a part-time resident at Higgins Ferry campground since 1984, and credits the “great people” for years of enjoyable experiences.

Woodruff owns a house in the area as well as his campsite at Higgins Ferry.

According to Woodruff, that experience has been enhanced even further over the past eight months, specifically during the time since Collum has taken over the park ranger duties.

“I have seen quite an improvement,” Woodruff said. “It has really been kept up and looks 100 percent better.”

The campground consists of 28 sites, 24 of which are full hookup with both sewer and electric capabilities, as well as five tent sites and a swimming area for visitors to enjoy.

Reservations are taken for campground sites three months in advance, and the pavilion on the lake can be booked for events for $50.

According to Collum, the pavilion has been a popular venue in the past for family reunions.

For Woodruff, a change of pace is what he seeks and often finds during his time at Higgins Ferry.

According to Woodruff, Lake Mitchell is known for its “awesome fishing,” and he took advantage of it by catching a 16-pound catfish earlier in the week.

In preparation for an influx of visitors over the next several months, the Lake Mitchell Home Owners and Boat Owners Association will hold a river cleanup known as “Renew Our Rivers” on Saturday.

According to Collum, people that live on the lake will bring their pontoon boats and load up with volunteers to help with the cleanup.

“People love it here,” Woodruff said. “Anybody would tell you the same thing.”

Jacob Jones (center) pictured with his parents Erica and Justin Jones, captured the hearts of many in Chilton County during... read more