An eight-run sixth inning by the Hillcrest Tuscaloosa Patriots cost the Chilton County Tigers in a 16-6 area softball loss at home on Friday. 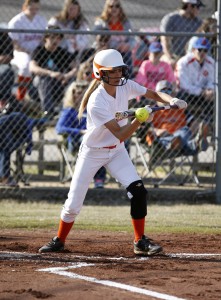 Gabriel Kelley of Chilton County High School lays down a bunt during an area softball game against Hillcrest Tuscaloosa on Friday. (Photo by Brandon Sumrall / Special)

A one out single helped set up an RBI single which put the Patriots on the board first in the top of the first inning.

A leadoff double was followed by a RBI triple that extended the Patriots lead to two as the game headed to the bottom of the second.

Cassie Phillips answered with a leadoff single of her own and singled with Morgan Dennis singled with two outs.

Despite the success, the second inning came to an end with the Tigers trailing 3-0.

An error by the Tigers in the top of the third extended the Hillcrest lead to three, but Chilton County responded with five runs in the home half of the third inning.

A walk to Scott started things off for the Tigers and a double by Burnette scored to put Chilton on the board.

Gabriel Kelley and Phillips followed with singles, while Caelyn Griffin walked with the bases loaded.

Allowing for more runs was a pair of Patriot errors that gave the Tigers a 5-4 lead.

However, lead lasted only as long as it took the Patriots to send six batters to the plate, as a bases loaded grand slam gave Hillcrest the lead right back, 8-5.

The Tigers cut the deficit to two in the home half of the fourth as Scott sent her first career home run over the left field wall to make the score 8-6 in favor of the Patriots.

The top of the sixth inning was Chilton County’s undoing, as the Patriots piled on eight runs in the inning on five singles, three doubles and two errors by the Tigers.

Chilton County could only muster a single in the bottom half of the inning and the game was called on the mercy rule.

Scott led the Tigers at the plate going 2-for-3 with a single, home run and an RBI. Hannah oaks handled the pitching for Chilton and allowed 19 hits, two walks and 13 earned runs over six innings.

Maplesville defeated Verbena 8-4 on the road on March 21 and improved its overall record to 11-2. Multiple players led... read more