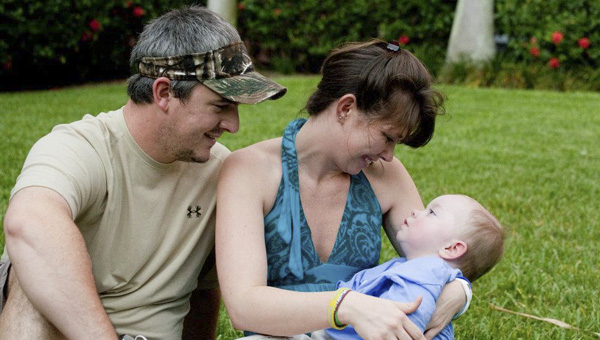 Jacob Jones (center) pictured with his parents Erica and Justin Jones, captured the hearts of many in Chilton County during his battle with a rare neurological disorder.

Jacob Jones, the 5-year-old Thorsby boy who captured the hearts of many in Chilton County during his battle with a rare neurological disorder, died on March 24.

“He was our hero, and he fought until the very end,” Jones’ grandmother Bette Lowery said. “He impacted so many lives, and now we know that he no longer needs his wheelchair and can walk in heaven with no more tubes. He has been made whole again.”

Jones was diagnosed with Tay-Sachs, a rare genetic disorder when he was only 14 months old in October 2012.

The disease causes a fatty substance to build up in the brain tissue and reach toxic levels, thus affecting nerve cells.

Although no cure has been found, medication can help slow a patient’s digression. 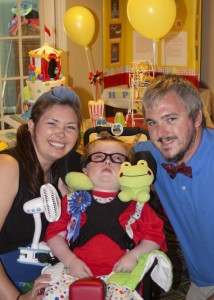 Jones was diagnosed with Tay-Sachs, a rare genetic disorder when he was only 14 months old in October 2012.

Jacob was the son of Justin and Erica Jones.

A funeral service will be held on Tuesday at 2 p.m. from Mt. Carmel Baptist No. 1 Church with the Rev. Wilbur Thomas, the Rev. Travis Burnett and the Rev. Billy Boatwright officiating.

Burial will follow in the Rocky Mount Community Cemetery in Jemison.

Lowery said everyone planning to attend the funeral has been asked to wear bright colors, including red and blue.

“We will all be wearing superhero shirts because Jacob was our superhero,” Lowery said. “He loved bright colors because he could see those better so we are asking everyone planning to attend to wear those colors and not any black. He was our special little man, and we miss him very much.”

In 2014, Make-A-Wish Alabama, All Star Pool and Spa, Supreme Electric, American Concrete Foundations and Wall, Crane Works and Alabama Teen Challenge teamed up to grant Jacob’s wish of getting his own therapy pool.

Jacob’s family said the therapy pool made things much easier for them after having to travel Interstate 65 North to the Lakeshore Foundation to get Jacob some swim time.

Swimming allowed Jacob to stay active and helped his body curb his condition.

In 2015, the family’s insurance stopped covering Jacob’s main medication, which slows the digression of the disease, so the family started relying on fundraisers and donations to cover medical costs.

“All the love and support from the community has been wonderful,” Lowery said. “We appreciate everything the community has done. All of the donations from the different events including the yard sales that we would have helped pay for his medical expenses. So many people donated their time, and it really meant a lot to us.”

Lowery said a special needs prom was held on March 26 at the Jemison Municipal Complex.

“We already had the prom planned so we had some friends take it over and finish it for us,” Lowery said. “There were 13-14 couples that came and had a blast. It turned out really well, and we are going to try to make it an annual event for the kids in Shelby and Chilton counties.”

Erica Jones said Jacob had a strong will to live and hopes those who knew him will always remember his smile.

“He always had the biggest smile on his face,” Jones said. “He had the purest soul and never did anything wrong in his life. He was just perfect in every way, and that is how I want everyone to remember him. Although we miss him terribly, we know he is happy and can play and run now, and he is free from hurt and pain.”