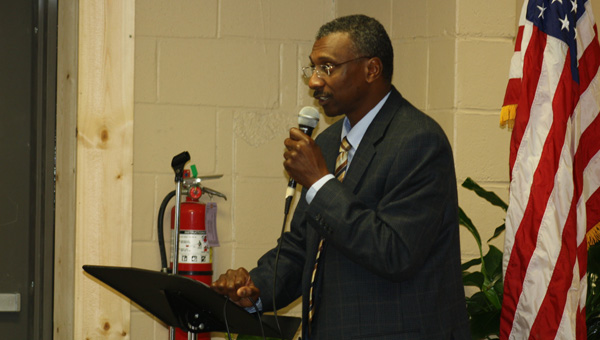 After more than two years, the E.M. Henry Community Center is open again.

A grand opening ceremony was held March 19, with attendees including city officials and those who have invested in the center’s re-opening.

“I was proud to see the community center back open and running,” Clanton City Councilman Greg DeJarnett said.

The center was closed due to fire code violations, leaving Clanton Head Start without classroom space for children and the West End community without its centerpiece.

More than $200,000 was spent on renovations, including the installation of a sprinkler system, remodeling of bathrooms to make them handicap accessible and cosmetic upgrades.

“I think people will be surprised by the renovations,” said Darrell Bolding, director of E.M. Henry Park. “A lot of it was structural, so people may not notice it, but we’re still in the process of having some other things that will be more visible.”

The program began at 11 a.m. After a welcome by Paul Dickerson with West End Neighborhood Watch, a scripture was read and prayer offered by Ocie Williams.

Barbara White with American Legion Post 343 led attendees in the Pledge of Allegiance before local singers and dancers entertained the crowd.

Jessie Binion with WENW gave a brief history of the organization that was founded in 1991 and has been instrumental in positive change in the community.

Carl Zeigler served as emcee for the event, and Nivory Gordon with USDA was the guest speaker.

“Even though it rained, we had a wonderful turnout,” she said.

DeJarnett said plans for the facility will be consistent with a vision for improvement of the community, and centered around six pillars: education, career, civic, community programs, community activities, and sports and recreation.

“We want to make sure we’re covering all the things that the community needs us to address,” DeJarnett said.

Space at the facility is available to rent for family reunions and similar events.

DeJarnett said a Head Start representative has toured the facility and is in the process of deciding whether to resume classes there.

“We’re just waiting to hear from them,” he said.

Future plans also call for a former storage area to be renovated into a space for seniors to fellowship.

“I just want to thank the mayor and the council, and especially (Councilman) Sammy Wilson for overseeing construction of the renovations that we’ve had to do, and also Darrell Bolding and Royce Rogers in the upkeep of the building and the park as a whole,” DeJarnett said.

Upcoming events include May Day, which was held for the first time last year. This year’s event will be May 14, or May 21 in the event of inclement weather.