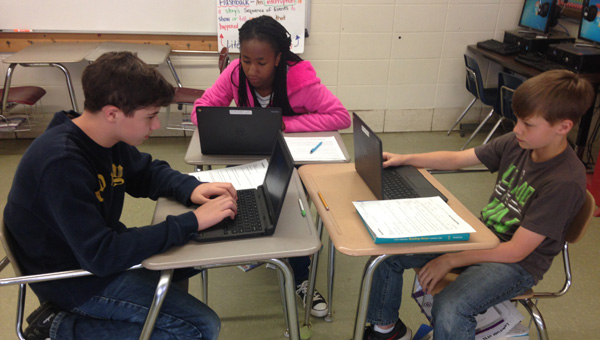 School work: Kirkland Robinson, Bryce Burns-Devers and Joseph Johnson use some of the Google Chromebooks that were purchased for their class because of donations and a grant. (Photos by Leisl Lemire)

By Leisl Lemire | Special to the Advertiser

Students in Britttany Yeargan’s sixth grade language arts/history class at Maplesville are thankful for the new Google Chromebooks at their disposal—even if they may not know who to thank.

A grant along with donations from parents and one large anonymous donation allowed Yeargan to purchase Chromebooks for the classroom, a goal the teacher has been working toward all year long.

As a teacher who, according to Principal Steven Hunter, “… gets out and does so much for the school and is always on the look out for grants and things that will help the kids,” she looked everywhere for opportunities.

One such opportunity was DonorsChoose.org, a website that provides a venue through which individuals or groups can combine resources and help provide needs for public school classrooms.

According to the website, the organization is “Connecting the public to public schools.”

Yeargan set up a page on the site and informed parents of her wish list. In her desire to move her students forward with the technology of Google Classroom, she needed to be able to provide Chromebooks for her students.

The donations began to trickle in—first parents and then others began to donate.

DonorsChoose facilitates donations from professional athletes, actors, entrepreneurs and entertainers that are used as matching gifts.

So, if a parent donates $20, that then becomes $40 for that classroom. On one particular day, a promotion was held called “#BestSchoolDay.” 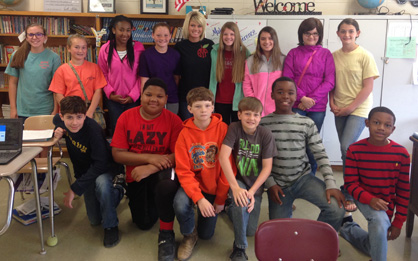 At this point Yeargan had already received quite a few donations toward her desire of 10 Chromebooks to be shared in the class—remaining was a balance of $1,848.14. On #BestSchoolDay, a donation was provided in that exact amount by an individual who chose to remain anonymous. Yeargan’s response?

Regardless, she was grateful. That donation effectively snowballed into even more good things for her classroom, including the a pursuit of $1,000 from CBS 42 That came through as well and will provide another six or seven Chromebooks, effectively allowing each student in her class to have one open on his or her desk for use in class.

Google Classroom allows for immediate research, which opens the door to more knowledge for students and expands classroom discussion in tangible ways.

One such discussion was about peanuts. Student Joseph Johnson wanted to know, is a peanut really a nut?

So using, the Chromebook, he looked it up and discovered within seconds that a peanut is in fact, a bean and not a nut.

Yeargan noted that in the past, that question might have gone overlooked or have been forgotten altogether, but now when students’ minds are working they can immediately go online and make use of the vast educational resources available on the internet.

Additionally, to allow for the most efficient use of school funds, anything that reduces the amount of paper used in the classroom is a boost.

At first students, weren’t sure how they felt about these changes. While excited about the new Chromebooks, it took a little getting used to because some found them to be complicated.

After a few weeks, they are more positive about the changes in the way the class functions.

Johnson, the peanut researcher, likes the fact that, “You don’t have to write on paper.”

Adolphus Harris agrees and said, “It is better to have technology. You have to write so much with pencil and paper.”

Xavia Stacy thinks, “It makes it easier for the teacher and the student.”

Another positive noted by Kayla Duncan for using Chromebooks is that “It helps with typing skills.”

Keynote speaker: Timothy Alexander, a UAB graduate who excelled despite disabilities caused by a wreck, was the keynote speaker at... read more