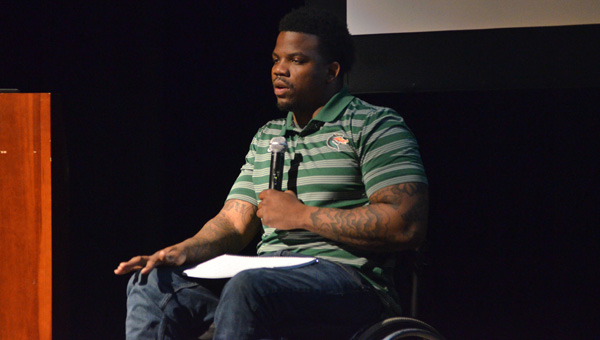 Keynote speaker: Timothy Alexander, a UAB graduate who excelled despite disabilities caused by a wreck, was the keynote speaker at the Student Transition Conference on March 16. (Photos by Stephen Dawkins)

Timothy Alexander had every reason to stop trying and stop believing in himself, but he refused.

The star football recruit who was left paralyzed by a wreck but still managed to earn a degree and make a difference in the lives of many spoke at the Student Transition Conference on March 16 at Clanton Conference and Performing Arts Center.

“I’m handi-capable, not handicapped,” Alexander told the group of about 100 students. “I can do anything I put my mind to.”

Alexander’s message was not lost on his audience of students who each face their own challenges.

“Your disability doesn’t define you—it’s your ability,” he said. “You only get one opportunity in life.”

Alexander was one of several speakers at the conference, the first of its kind held in the county.

“The kids related so well to what he was saying,” Robinson said about Alexander, the keynote speaker. “He was speaking to them in their language. He didn’t test well and had other issues (as a result of the wreck) but was able to overcome that. I thought it was good for them to see that.” 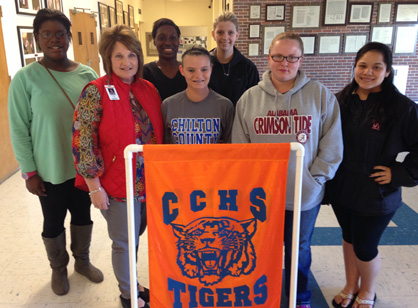 Students in Paige Scruggs’ class at Chilton County High School said Alexander made a positive impression on them.

“It doesn’t matter if you have a disability, you can do anything,” Rosa Pierce said.

The conference was the result of a cooperative partnership between the BOE and the Alabama Department of Rehabilitation Services.

Special education students in grades 9-12 from every school in the county attended.

Because of the conference, students said they felt more prepared to enter college or the workforce.

“I wouldn’t have known how to get started (without the conference),” Tapecia Harris said.

Robinson said at the beginning of the school year, parents of special education students were invited to a seminar. She said she would like to see these efforts continue and grow.

“We would love for it to be an annual event,” Robinson said. “We need more parent involvement, and we need students to become self-advocates for themselves. Our students need to have a plan for life after high school.”