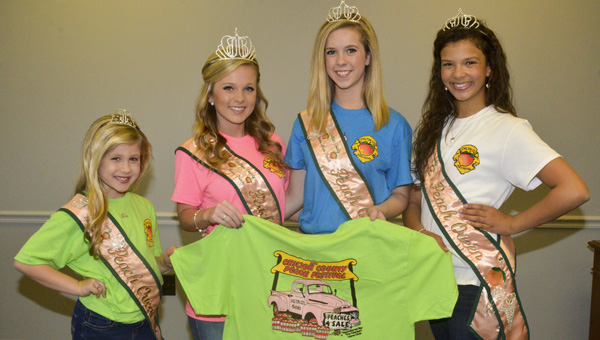 The 2016 Peach Festival T-shirts can be purchased at local businesses in Chilton County.

The cost of the shirts are $13 each for youth sizes through adult extra-large and $15 each for 2X-3X sizes.

The price for the shirts includes tax.

The colors are turquoise, lime green, gray, pink and white.

This year’s design features an old farm truck design, which Culpepper said was an effort to show appreciation to the farmers.

“We thought the design also kind of dates how long the Peach Festival has been going on,” Culpepper said. “We tried to get the shirts out before Spring Break, so they hit the stores on [March 18].”

The Peach Festival is held the last two weeks of June.

Proceeds from the events benefit the club’s charitable work in the community.

Kayleen McCabe speaks to a crowd of Jemison Middle and High School students about the opportunities in trade careers. She... read more