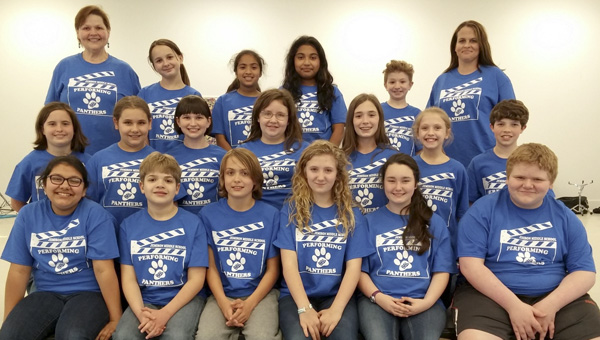 Students at Jemison Middle School are gearing up to perform a spring play on Tuesday called “12 Angry Pigs.”

“This is the first time to put on a play here at the middle school,” said JMS counselor and teacher Julie Lawrence. “The Parent Teacher Organization president helped coordinate the idea.”

PTO president Jillena Smets said when she joined the PTO she noticed there didn’t seem to be any arts offered for the students at the school.

“There were different groups for kids to be involved in, but there wasn’t an outlet for kids who didn’t want to be involved in activities like sports. I thought the play sounded like a lot of fun, which is how everything got started.”

Auditions were held in January for students in grades 5-7, but only fifth and sixth grade students auditioned.

“We have been practicing twice a week since the beginning of the year,” Smets said. “It has been a lot of fun. Most of the kids didn’t have any previous experience in acting. Some of them might have performed in a skit at their church or something, but for the most part a lot of them are doing this for the first time.”

Smets said she wanted to make the experience of putting on a play an educational one, and would have different lessons for the students related to acting.

“One day we went over the different ways to act out emotion.” Smets said. “We also had a local makeup artist come and show everyone how to make bruises, cuts and scrapes with makeup. The kids really enjoyed learning about that.”

The students also decided to come up with a name for their performing group: “The Performing Panthers,” Smets said.

In “12 Angry Pigs,” the pigs are the jury and the wolf is on trial for blowing down the houses.

“It is all meant to be fun and laughter,” Smets said. “The goal is to get the audience laughing and enjoying themselves. The kids will also be doing some small skits and stand-up jokes.”

In addition to the play, Smets said there will be performances from students attending Donna’s Dancers and Tammie’s Twirlers.

“We just want to provide different forms of art for those attending,” Smets said.

The play will be held in the cafeteria at Jemison Middle School.

The cost to attend is $5 for adults, $2 for school-aged children, and children 5 and under are free.

Tickets are available for purchase at the door. The play begins at 7 p.m.

Jemison Middle School is located at 1491 County Road 44 in Jemison.

Barnett, Argent assist as Players of the Year

Adi Argent and Lilly Barnett of Thorsby have developed into quite a guard tandem that opponents must deal with when... read more