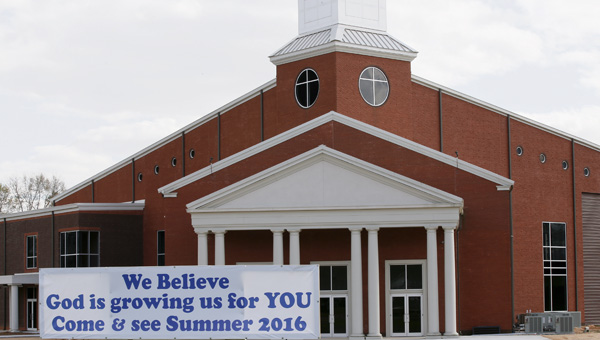 The excitement level among the members of West End Baptist church continues to grow as completion of their new sanctuary draws near.

What started out as a dream in late 2009 is quickly becoming reality as heating ducts, sheet rock, tons of steel and hundreds of feet of electrical wiring have taken their homes in the new building as what once was just a shell comes closer to completion.

“This building is being put here by God for this community, this city, this county and this area,” Associate Pastor Eddie Lightsey said. “We feel that God is going to draw people here.”

Though design on the building has been years in the making it, has been a pleasant process for the members of West End as everyone involved in the design and construction of the building has worked well together.

“God allowed for us to have the right architect, general contractors, and sub contractors working together to make this process flow so well,” Audio and Video Chair and Building Committee member Larry Mays said.

With the exterior shell of the sanctuary completed back in 2012 along with the first of two wings which houses multiple child care and Sunday school classes, construction reconvened in November of last year to finish out the interior of the sanctuary building.

Along with multiple construction crews, the church’s building committee as well as multiple other planning committees and staff have been hard at work over the past several months, but it has not been by their own doing.

“We didn’t do any of this; the Lord has put the right people in place to bring all of this together and all we had to do was step back and allow him to open the doors,” Building Committee Chair Ronnie Carmichael said.

With the first service in the new building just a few months away, there is a lot of work left to be done, and the members of West End are more than ready to roll up their sleeves.

“There is a tremendous amount of items we already have such as chairs, furnishings, and audio video equipment that will need to be moved to the new building, and we will have to organize a few works days to get all that done, but with this congregation and the excitement to get in the new building, helping hands won’t be hard to come by,” Lightsey said.

The completion of the new sanctuary will increase the seating capacity by nearly 500 people, but the West End staff is not sitting idly by wondering how to fill those seats.

“Our chairman of deacons Andy Williams has really challenged us to not treat this as a ‘build it and they will come,’” Lightsey said. “We have a lot of things that we are putting into place. We are infusing our ministries from the children all the way up to our outreach program to do the best job we can reaching out to the community in order to fill those seats and to see what the Lord is doing at West End.”

Even after completion of the new sanctuary, the work will be far from done as a second wing is still in the plans for the new building that will house staff offices and a choir suite, but for the staff and congregation of West End, the first Sunday morning service in the new sanctuary is sure to be a special occasion and one that they would love for everyone to be a part of.

Students at Jemison Middle School are gearing up to perform a spring play on Tuesday called “12 Angry Pigs.” The... read more