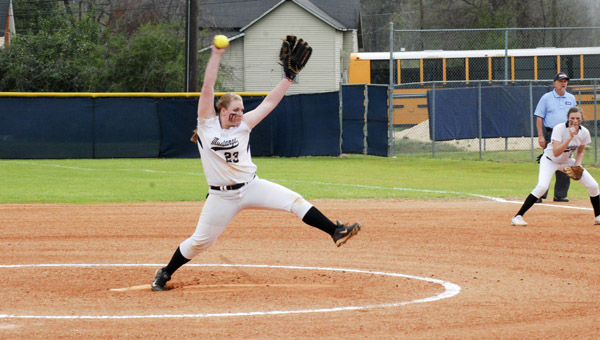 Rain has forced the reshuffling of the proposed schedule at the Chilton County Softball Tournament hosted by Jemison High School.

The weather has created havoc on the game times, and the threat is expected to continue into the early morning hours of Saturday.

If the projected forecasts hold true, the pool play portion of the event will be scratched, and the teams will play a single-elimination bracket on Saturday to crown the county’s champion.

The single-elimination format was already scheduled for Saturday and would now just take place without the help of pool play to determine the seeding process.

“We’ve talked to all the coaches about redrawing [seeds] and then just show up and play in the single-elimination format,” Jemison head coach and tournament host Nathan Hayes said.

Two results were finalized prior to the initial rain grabbing hold of the tournament on March 17.

Thorsby opened tournament play with a 15-0 win over Isabella in four innings.

The Rebels pounced early by scoring 13 runs in the first inning, 10 of which crossed home plate before the Mustangs were able to record their first out.

From there, pitcher Adi Niamon and the defense took over to comfortably shut out Isabella’s lineup.

The second game of pool play on March 17 showcased Jemison and Maplesville.

However, the game was stopped short in the fourth inning due to the wet conditions.

The victory was credited to Jemison, as the Panthers led 6-0 at the point of cancellation.

The rain continued, and the late game on the schedule between Chilton County and Thorsby was cancelled.

Saturday’s bracket schedule will begin at 9 a.m. with a matchup between Thorsby and Jemison, with the winner playing Chilton County in the semifinals at 10:30 a.m.

Maplesville and Verbena are scheduled to play at noon and the winner will play Isabella in the other semifinal at 1:30 p.m.