Fish do not need lights in their homes (community correspondent) 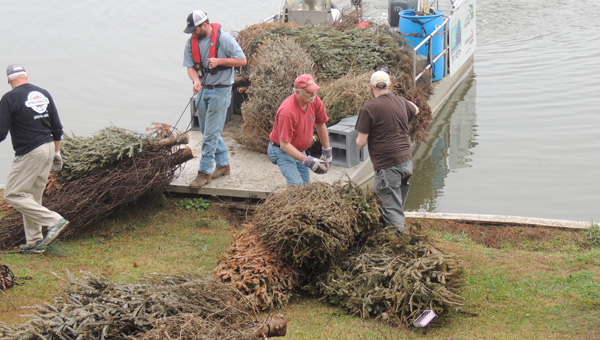 Preparing for the drop: Volunteers prepare Christmas trees to be dropped into Lake Mitchell to serve as fish habitats. (Photos by Peggy Bullard)

This year’s group did a great job bundling Christmas trees and dropping them around the lake to create fish habitats on March 15.

Alabama Power workers and Lake Mitchell HOBO volunteers made up a team of 18 to get the job done quickly.

There were only about 100 trees to be dropped on the lower end of the lake from Higgins Ferry Park.

Each year, we find an ornament or two left on the trees, but not this year. What we did have were two very large trees with each limb from the smallest to the largest wrapped tightly with lights. Some were even tied in tight knots. 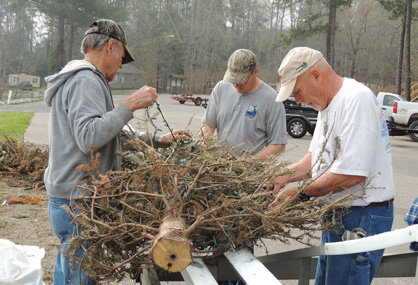 All tied up: Volunteers attempt to remove lights from Christmas trees before they are dropped in the lake.

The person putting those lights on had no intentions of taking them off.

Many of the 18 men tried unwrapping them and gave up, but we had three that persevered and got the job done. Even they resorted into cutting some of the cords.

Dropping trees in the lake with lights attached was not an option. No lights in the fish houses on Lake Mitchell!

On March 22, there will be a drop on the upper end near Lay Dam. Volunteers will meet at Larverda Landing at 9 a.m.

The spring Renew Our Rivers cleanup will be April 2 at 8 a.m. at Higgins Ferry.

With all the rain and winds we’ve had this year, there is plenty of trash in our lake. We welcome volunteers.

Peggy Bullard is a community correspondent for the Lake Mitchell area. Look for the next installment of her column in a future edition of The Clanton Advertiser.

Pastor appreciation: The Rev. Elijah Good and his wife will be recognized at the 40th Church Anniversary for the World’s... read more