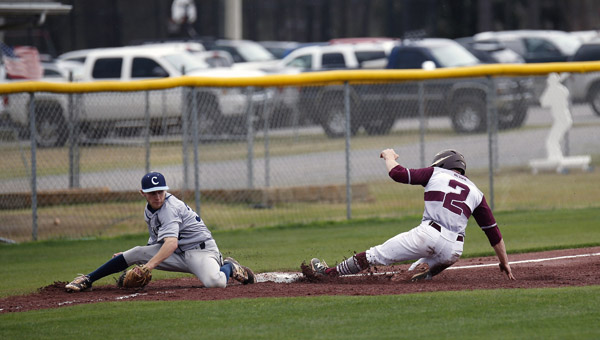 Conner McRae of Thorsby slides safely into third base, as the throw drifts wide in a game on Saturday against Calera High School. (Photo by Brandon Sumrall / Special)

Thorsby varsity baseball split a pair of games during a Saturday trip to Calera High School, as the Rebels knocked off the Eagles 7-4 and lost to the Montevallo Bulldogs 21-5.

The Rebels got on the board early in the first game, as back-to-back singles by Conner McRae and Grayson Bice set up a two-run double by Bailey Sellers to give Thorsby an early 2-0 lead.

Calera grabbed the lead with three runs in the bottom of the second inning.

However, the lead did not last long, as the Rebels answered with two more runs in the top of the fourth.

A single by McRae helped set up a RBI ground ball by Bice, who later scored on a wild pitch to put the lead back in Thorsby’s favor, 4-3.

The Eagles went quietly through the bottom half of the third inning, as the score remained the same as the game moved to the fifth.

Dylan Carroll began the top of the sixth with a double for the Rebels and was followed by a single from Austin Adams.

A bunt by Ken Mims scored Carroll, and a ground ball up the middle brought Adams and Mims home and cemented a 7-4 Thorsby lead.

Sellers led the Rebels at the plate going 2-for-4 with a single, double and two RBIs. Austin Knight pitched three innings for the Rebels, allowing no hits, one walk and one strikeout.

Game 2 of the series did not go as well for the Rebels as five free bases and a pair of errors aided an 11-run bottom of the first for the Montevallo Bulldogs to put Thorsby in an early 11-0 hole.

After a scoreless top of the second for Thorsby, the Bulldogs tacked on one more in the bottom half of the inning to extend their lead to 12 runs.

A two-out double by McRae in the top of the third did little to help the Rebels’ cause.

A pair of singles by Sellers and Carroll set up a RBI double by Adams, and a bases loaded double by Brock Higgins cleared the bags and gave the Rebels five runs in the top of the fourth.

McRae led the Rebels at the plate in Game 2 with a 3-for-3 performance with two singles and a double.