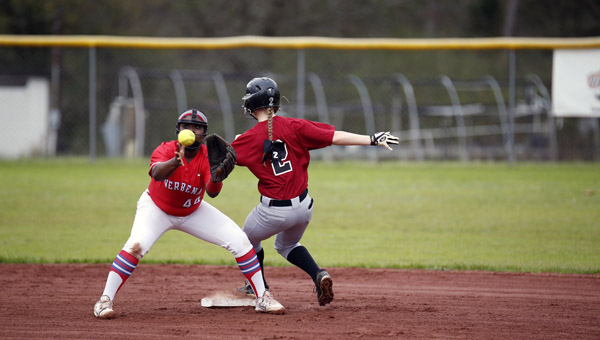 Brinley Carter of Maplesville (No. 2) reaches second base safely prior to the ball’s arrival in the glove of Verbena’s Chelsea Ray on Friday. (Photo by Brandon Sumrall / Special)

A late-game comeback by the Verbena varsity softball team came up just short, as the Red Devils suffered a 13-10 home loss to county rival Maplesville on Friday night.

Brinley Carter got things started for Maplesville by reaching first after being hit by a pitch, and a single by Josey Smitherman set up an RBI opportunity for Megan Weaver.

An infield ground ball by Amy Fletcher scored Smitherman, and a ground ball up the middle by Emily McGee scored Weaver, which gave Maplesville an early 3-0 lead.

Katelyn Green led off for Verbena in the bottom half of the first with a single and was followed by a double by Chelsea Ray, as Verbena found the scoreboard and trailed 3-1 after one inning of play.

Allison Jones walked with the bases loaded, and Gracie Harrison came home to score after reaching on a walk earlier in the inning.

Verbena went scoreless in the bottom half of the inning, as Maplesville led 4-1 after two.

Three straight walks were issued to Maplesville in the top of the third and set the stage for a two-run double by Carter and a RBI single by Smitherman.

Maplesville extended its lead to 8-1 in the top of the fourth inning.

Verbena answered with two runs in the bottom half of the inning, thanks to a bases loaded walk to Samantha Dopson that scored Candice Williams.

Katelyn Green was hit by a pitch, which prompted Jenae Pierce to score as well and cut the deficit to five runs.

Harrison picked up her third walk of the evening to open the top of the sixth for Maplesville, and she later scored on a wild pitch.

A walk to Smitherman and a single by Weaver loaded the bases for Maplesville with two outs.

Carter scored on a wild pitch while singles by Kayla Epperson and Fletcher increased the Verbena lead to 10 runs, 13-3.

Three straight walks for Verbena set up a two-run ground ball by Chelsea Ray to score Green and Dopson.

Another ground ball by Makayla Mims scored Janiya White and Fletcher to make the score 13-7 going to the top of the seventh.

After a ground ball out to start the bottom half of the seventh inning, back to back singles by Brianna Price and Chelsea Baker breathed new life into Verbena.

Green followed it up with an RBI single and then Verbena converted on a two-run fly ball to left field that cut the Maplesville lead to three.

Down to their final out, a fly ball to shortstop hauled in by Maplesville brought the game to an end.

McGee got the start for Maplesville and pitched 4 2/3 innings, allowing three earned runs, four hits, two walks and one strikeout.

Carter led Maplesville at the plate with a 2-for-4 performance that included a single, a double and two RBIs.

Green led Verbena at the plate with a pair of singles and RBIs.

Tyus’ hard work leads to player of the year honor

Verbena’s Juwan Tyus was chosen as the Chilton County Area Basketball Player of the Year in boys basketball by The... read more