Tyus’ hard work leads to player of the year honor 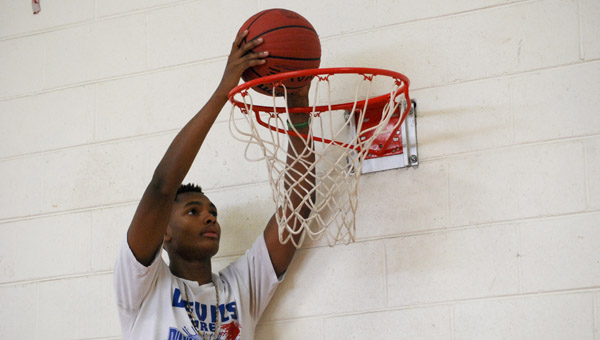 Verbena’s Juwan Tyus was chosen as the Chilton County Area Basketball Player of the Year in boys basketball by The Clanton Advertiser, after displaying the ability to score from anywhere on the court. (Photo by Anthony Richards / Advertiser)

Since the first time Juwan Tyus picked up a basketball, he vividly remembers his grandfather saying, “Hard work pays off in the long run; you’ve just got to be humble.”

Though he may not have fully understood it at the time, that mantra has remained a part of who he has become and has translated to his performance on the basketball court.

Tyus’ mixture of size and speed presents a nightmare for opposing defenses, while helping open up opportunities for his teammates on the offensive end.

“I’m left-handed, which can be difficult for most people to guard,” Tyus said.

The junior hybrid forward finished the season just shy of averaging a double-double with 24 points and nine rebounds per game. He also showcased his defensive skills by averaging three blocks per game.

“Coach [Mark Cleckler] has continued to tell me in practice that it is up to me to lead by example,” Tyus said. “It’s a mindset to hustle and chase down every ball. It comes down to doing whatever needs to be done.”

According to Tyus, Cleckler has by far been the most influential to his basketball career.

“My coach has been telling me that I’m going to be a key part of the team since the eighth grade,” Tyus said. “When I was in junior high, I had certain players that I looked up to, and now I’m able to be that person.”

Tyus credits Cleckler and Scott Doss for helping to expand his game with the development of a reliable jump shot that has continued to progress since the seventh grade.

“I could never shoot when I was in the seventh grade,” Tyus said. “Having that ability helps create space and open up the floor for my teammates.”

Over time, he has developed his playing style with various NBA players in mind. He models his jump shot after Chris Bosh of the Miami Heat and his ability to drive to the basket after James Harden of the Houston Rockets.

His future plans include continuing to grow as a player with the goal of playing at the college level.

Tyus has high hopes as he returns for his senior season next year, as he looks to help lead the Red Devils to a county tournament title and an elusive berth in the state playoffs.

“It seems like every year we’re one win away,” Tyus said. “That’s definitely going to be our main goal.”

Verbena’s Stephen Bryant slides into second base and just beats the tag attempt by Trevor Wallace of Maplesville. (Photo by... read more