Students learn about water at festival 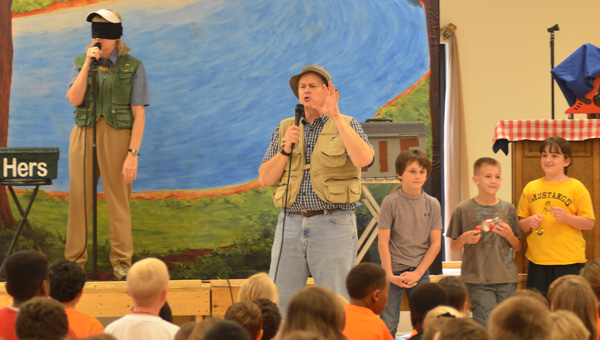 Almost 500 Chilton County fourth grade students on Friday learned about water and its importance in their lives.

Stations were set up to teach students different lessons about water.

One station, called “Water Cycle Bracelet,” encouraged students to construct a bracelet that described the stages of the water cycle by color.

Another station, called “Fantastic Filtration,” gave students the opportunity to add “pollution” to a cup of water before filtering the water through cloth and a coffee filter to make it clear again.

Instructor Don Burdette with the Chilton Natural Resources Council said the goal was to start students at a young age thinking about how to lessen their negative impact on water.

“Right now, we want them to think about pollution,” Burdette said. “As they get older, they’ll pick up on these other things they can help with.”

Student Ethan Segars of Joe Esther’s class at Jemison said he understood the effect contaminants can have on water.

“You can make water clean again, but it takes a lot of work,” Segars said. “We learned you should stop littering.”

A third station was “Edible Aquifers,” where students filled the bottom of a plastic cup with gummy worms to represent aquifers before placing ice cream on top to represent soil.

Sprinkles on top of the ice cream represented pollutants, and then they poured soda over the top to show how precipitation washes pollutants into aquifers.

The Festival also included a water-focused magic show by the “Fishin’ Magicians,” Amy and Steve Penick from Arkansas.

Students from each county public and private school except Thorsby spent time at each station.

A $2,500 tag grant from Alabama Forest Forever helped allow the event to be held.

“We give a huge credit to Jemison First Baptist Church,” said Brian Smith with the Alabama Forestry Commission. “Not only did they give us the location, they’ve helped with everything.” 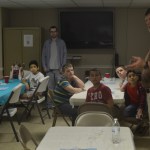 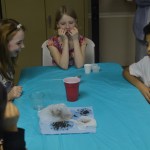 Mess to clean: Erika Paredes, Alondra Morales, Creadince Miller, Katelynn Clark and Marc Blanco of Jemison Elementary School consider how to clean water that has been dirtied by “contaminants.” 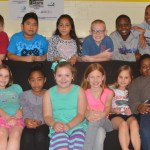