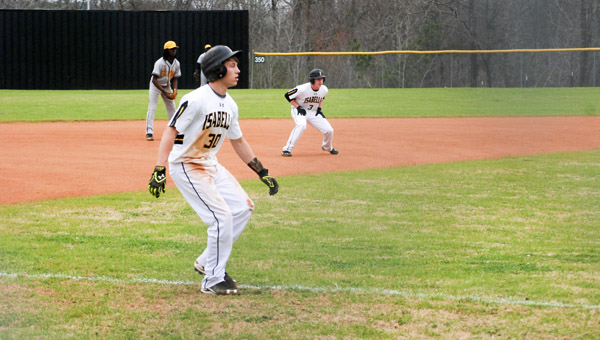 Tyler Durham, Jacob Davis and the rest of the Isabella baseball team looked to force the issue on the base paths against Ellwood Christian on Thursday. (Photo by Anthony Richards / Advertiser)

The Isabella Mustangs captured an 11-1 home victory in five innings over Ellwood Christian on Thursday night.

“I had a feeling that we would come in and do good, because of the way that we had been practicing throughout the week,” said Tyler Durham, Isabella third baseman.

It was obvious early on that Isabella’s approach was to create a frantic atmosphere on the base paths, and it did not take long for that to take shape.

“We’ve made certain mistakes this year on the base paths by not paying attention to signs,” Isabella head coach Scott Booth said. “We did a whole lot better at that tonight.”

The Mustangs quickly jumped out to an 8-0 lead after two innings that was fueled by stolen bases and Ellwood Christian errors.

“We want to try to advance the runners the best we can in order to give our batters the chance to drive runs in,” Booth said. “You’ve got to be able to capitalize on every little mistake that teams make.”

In the first inning, Jacob Davis helped set the tone by reaching base and moments later crossed home plate, after swiping both second and third base.

This trend continued with each inning that passed, as Dalton Smitherman erupted in the bottom of the third with a standup triple to left center field.

Jamie Patterson and Ryan Headley each followed that up by reaching base on a walk and later coming home to score and increase Isabella’s lead to 11-0.

Jarrett Baker started for the Mustangs and pitched all five innings and allowed just one earned run, which came in the final inning.

“Our pitchers have seemed to be getting in a groove, and we’ve cut down the number of walks from earlier in the season,” Booth said. “He’s a young guy, but he did an excellent job of making them have to put the ball in play.”