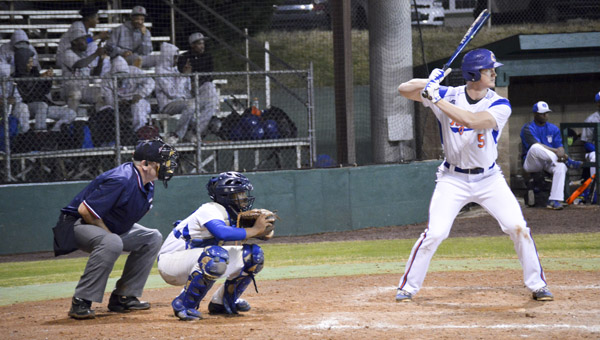 Hunter Bennett of CCHS digs in the batter’s box prior to driving in RBIs No. 18 and 19 on the season. (Photo by Brian Millican / Special)

The game ended up being called in the sixth inning due to torrential rain, but both teams played hard during the time, and the Tigers suffered a 5-3 loss.

Jarrett Ricks made his varsity pitching debut for the Tigers as a sophomore, and gave Ramsay all they could handle for 4 ½ innings.

In the top of the first, the Rams were able to take a 1-0 lead on a bases loaded hit batsman.

Ricks struck out three in the inning and eventually worked his way out of the jam with only the one run scoring.

Cade Hatch led off the bottom of the first inning with a single, while Corbin Bice followed with a single of his own.

However, the Tigers were unable to plate a run and trailed 1-0 after one.

Ramsay scored two more runs in the second inning courtesy of an error on the Tigers’ second baseman.

With runners at second and third, a ground ball made its way through the glove of the second baseman, allowing both runners to score.

Ricks struck out two more in the inning, but the Rams led 3-0 after two.

A double by Brown and a successful suicide squeeze gave Ramsay a 5-0 lead in the fourth inning.

With eight strikeouts already on the night, Ricks held the Rams scoreless in the fifth inning as his boys began to claw their way back.

Eiland Cleckler led off the fifth with a single but was forced out at second when Trevor Thompson hit into a fielder’s choice.

Hatch singled, moving Thompson to third. Hatch then moved into scoring position on a passed ball.

The Tigers were sitting pretty after Giquan Lane walked to load the bases.

Bice hit a long sacrifice fly, scoring Thompson and putting the Tigers on the board.

Hunter Bennett then came to the plate and drove the ball to the left-center wall, resulting in his 18th and 19th RBIs of the season.

The rain came and went throughout the first four innings, but in the fifth inning, it really began to pour.

Both teams tried to battle through it, but it soon made the playing field dangerous and the game was called in the top of the sixth with the Tigers on the losing end.

Ricks was the star performer for the Tigers on the night, striking out nine and allowing only two earned runs in 4 1/2 innings of work.

Bennett continued to do well at the plate, driving in two of the Tigers’ three runs.

Chilton County is now 9-5 on the season.