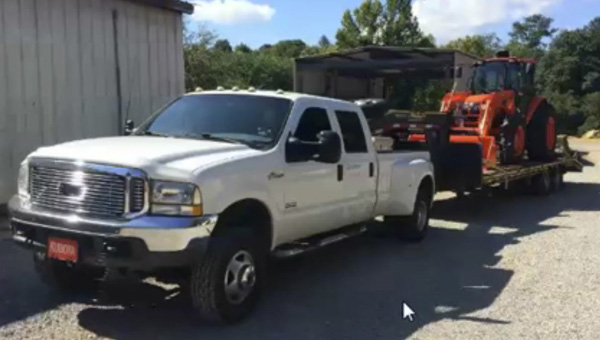 Theft victim: Two pickup trucks, including the one pictured, were stolen from Clanton Tractor along with three trailers and six zero-turn lawnmowers on Tuesday. (Contributed photos)

Police are searching for leads after more than $30,000 worth of vehicles, trailers and brand new lawnmowers were stolen from Clanton Tractor before dawn on Tuesday.

The suspects used other equipment at the business, including a forklift to load the mowers, in the theft. They also used vehicles stolen from a Union Springs construction company, and police are hoping that will allow them to track down the suspects.

The theft occurred at about 3 a.m. Tuesday at 909 Seventh Street South in Clanton.

Two vehicles entered the premises. Over the course of about an hour, the suspects loaded mowers onto trucks, and then four vehicles exited the business.

A fifth vehicle was part of the caravan but was left behind at Clanton Tractor when it suffered transmission trouble, said Capt. David Clackley with Clanton Police Department. 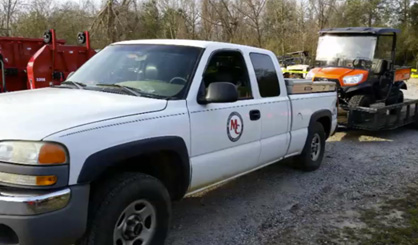 Left behind: A truck stolen from a Union Springs business was left behind at Clanton Tractor when it suffered a mechanical problem as the suspects were attempting to drive away.

The incident has been linked to the theft of five trucks and a trailer from Union Springs. The vehicles may still bear “McDonald Construction” logos, so Clackley asked people to be on the lookout.

“If you work at a gas station, restaurant, motel, and if you’ve had contact with these people, and these particular vehicles, if you could get with us and help us close this case, we’d appreciate it,” Clackley said in a video posted to the CPD Facebook page.

The vehicles taken from Clanton Tractor include a 1999 Ford F350 and a 2004 Chevrolet Silverado.

Bates said he is hopeful insurance will help cover at least part of the losses, but even under a best-case scenario, the business would still be out several thousand dollars.

At least five suspects were present during the theft, Clackley said while returning to Clanton from Millbrook, where it is believed the suspects fueled up after the theft.

Clackley said keys were likely found inside the vehicles, though security measures are in place at the business, including the surveillance cameras.

Bates said Clanton Tractor has been the victim of theft before but never on the scale of this week’s incident, which may force a community-minded business to take further steps for security.

“We’ve always been open: People come in on Sundays when nobody is here and let their kids sit on tractors,” Bates said. “People shop and look when nobody is around. It’s just gotten to where we can’t afford to do that anymore. We may have to put a fence around the whole thing.

Support from the community has been encouraging, Bates said.

“We’ve had a dozen people call and offer to loan us what we need until we get the situation in hand,” he said. “I appreciate the community’s support.”

Anyone with information about the case should call CPD Detective Tera Easterling at (205) 755-1194.

Leighanne and Brantley Bice recently bought Elite Salon from Amber Price and joined the team of six stylists at the... read more