Thorsby sweeps Billingsley on the road 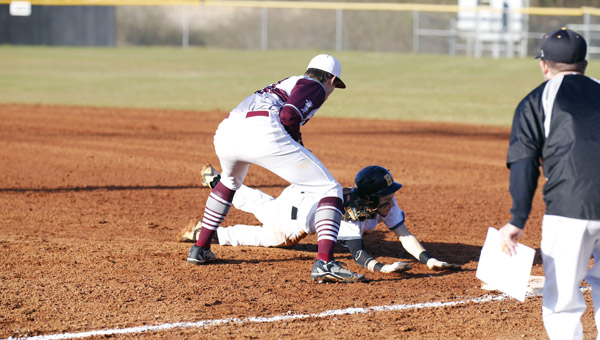 Eric Willis of Billingsley is tagged out by Thorsby’s Bailey Sellers after getting caught in a run down at Billingsley on Friday. (Photo by Brandon Sumrall)

The Thorsby Rebels varsity baseball team served up a double helping to the Billingsley Bears on March 4 by knocking off the home standing Bears in back-to-back games, 8-1 and 13-2.

Errors cost the Bears heavily in Game 1, and did so from the start of the game as back-to-back errors in the top of the first inning allowed Conner McRae and Grayson Bice to reach base safely.

With the bases loaded following a single from Bailey Sellers, a fielder’s choice ground ball by Dylan Carroll allowed McRae to score.

Landon Reed started off the Bears’ half of the first inning by reaching on a Rebels error and later scored on a wild pitch to make the score 4-1 after one inning of play.

The second inning went quietly for both squads before the Rebels tacked on two more in the top half of the third.

Another Bears error allowed Brock Higgins to reach base safely, and Higgins later scored on another Billingsley error off the bat of Sorcia to put the Rebels up four.

A single by Bice scored Sorcia to make the score 6-1 going into the bottom of the third.

A three-up, three-down bottom of the third for Billingsley sent the game to the fourth, but neither team managed any offense in the inning to keep the score the same after four innings of play.

Stephen Antinoro started the top half of the fifth by reaching base on a walk, and with McRae reaching first when hit by a pitch, a two-run double by Sellers brought Game 1 to its final score of 8-1.

Knight led the Rebels at the plate in Game 1with two singles and two RBIs on three at-bats.

Christopher Niece got the start for the Rebels on the mound and carried a no-hitter through four innings along with five strikeouts and one walk.

Drayton Dubose broke up the no-hitter with a single, and was the only Bear to pick up a hit in Game 1.

Jamie Barnett got the start on the mound for Billingsley and pitched five innings, allowing three runs with eight hits, two walks and two strikeouts.

Game 2 got underway with McRae receiving a pass to first base via a bean ball and later scoring on a bases loaded walk to Higgins.

A walk to Noah Godwin and single by Jordan Thompson did nothing for the Bears’ cause in the bottom half of the first as the game went to the second with Thorsby leading 1-0.

The Rebels added another run in the top of the second when a walk to Sorcia set up a RBI single by McRae to make the Thorsby lead 2-0.

Consecutive walks to Higgins and Ken Mims set up an RBI double by Austin Adams and a RBI bunt by Sorcia. McRae followed with a two-run double and later scored on a wild pitch to make the Thorsby lead 7-1.

The Bears got on the board in the bottom half of the third inning as Larry Starks started the inning with a walk and was followed by a single by Landon Reed.

A double by Walker Motley scored both Starks and Reed to make the score 7-2 after three innings of play.

A two-out bases-loaded triple by Bice gave the Rebels three more runs on the board and with Bice scoring on a wild pitch, Thorsby took an 11-2 lead to the bottom of the fourth.

A Billingsley error on a Knight ground ball and a single by Micheal Patterson set up a two-run double by Adams to make the score 13-2 heading to the bottom of the fifth.

Two Bears’ strikeouts and a fly ball to center field invoked the mercy rule and gave the Rebels the win.

McRae lead Thorsby at the plate in game two with a 3-for-3 performance with two single, a double and three RBIs.

Higgins got the start on the mound and threw three innings with two earned runs, four hits, three walks and two strikeouts.

Motley led the Bears with a two-run double, and Willis got the start and pitched 2 2/3 innings with seven earned runs, seven walks, five hits and four strikeouts.

Thorsby meets its match in regionals

Thorsby’s Adi Argent flies down the court against Ider during the AHSAA Northeast Regional competition on Friday. (Photo by Anthony... read more