Maplesville piles on the runs against Holy Spirit 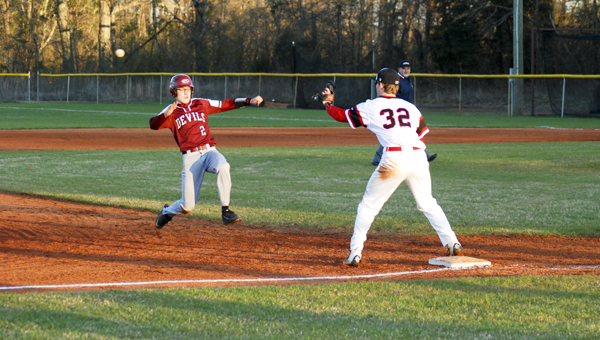 Maplesville’s Aaron Dunkin begins to slide into third base in an attempt to beat the relay throw during a doubleheader against Holy Spirit on Friday. (Photo by Anthony Richards / Advertiser)

Maplesville’s varsity baseball team lit up the scoreboard and swept Holy Spirit in a pair of games decided by a run-rule on Friday.

The Red Devils took Game 1, 12-2 in six innings, thanks to its lineup coming alive at the plate mid-way through the contest.

“We knew that we just had to remain confident in our abilities,” Maplesville junior Alex Smith said. “I can’t ask any more from my teammates. It feels good to know that I have them behind me.”

Leading 2-1 heading into the fourth inning, Maplesville exploded for four runs with an RBI single from Alex Smith and a two-run double by Devan Wallace, which quickly increased its lead.

The entire Maplesville batting order stepped to the plate during the fourth inning, and the momentum swung in the Red Devils’ favor.

“It’s kind of day-by-day right now, but they are growing closer together,” Maplesville head coach Brandon Shanks said. “Baseball should be a fun game, and this year’s group has really taken that to heart. Good things happen when you’re having fun.”

Holy Spirit scored a run in the fifth and was threatening once again in the sixth with the bases loaded and one out.

However, Trevor Wallace, Thomas Schoener and Aaron Dunkin turned a double play to escape the jam without any damage.

The offensive production continued in Game 2, as Maplesville cruised to an 11-1 win over Holy Spirit in five innings.

“It usually just takes a spark in some aspect of the game that feeds over to the rest of it,” Shanks said. “We got out of a jam late with a double play, and that ended up carrying over to the bats.”

Trevor Wallace pitched all five innings for the Red Devils and allowed three hits, while mowing down eight.

Not only did Wallace showcase his skill on the mound, but also at the plate with a three-run home run to help his own cause.

Devan Wallace went a perfect three-for-three at the plate with a double. Wallace, Trent Smith and Alex Smith each finished the game with a pair of RBIs.

“The difference from last year to this year, is that we always have smiles on our faces and we remain positive,” Smith said. “I think that’s going to take us far.”

The victories improve Maplesville’s overall record to 7-2 for the season.

Thorsby sweeps Billingsley on the road

Eric Willis of Billingsley is tagged out by Thorsby’s Bailey Sellers after getting caught in a run down at Billingsley... read more