Jemison fights back to split doubleheader with CCHS 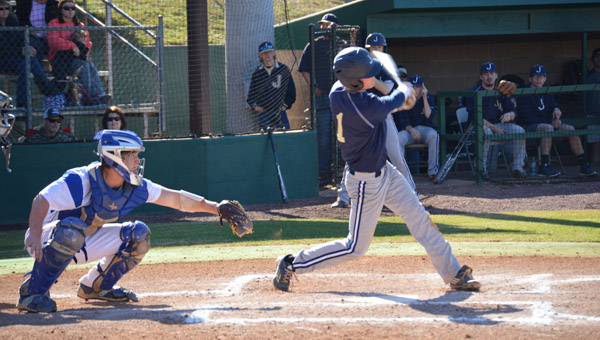 Will Lenoir of Jemison drives in two runs with a base hit against Chilton County High School during Game 2 of a doubleheader on Saturday. (Photo by Brian Millican / Special)

On paper, Game 2 was sure to be another close battle. However, Banks Woodley and the Panthers had something else in mind.

Dustin Cleckler put the Tigers on the board in the first inning with an impressive RBI double, but those two runs are all that crossed the plate for Chilton County in the second contest.

Jemison countered Chilton County’s two runs with four of their own in the top of the second, as Will Johns scored on a passed ball, Trea Sanders scored on a single by lead-off man Will Lenoir, Matthew Ramsey scored on a sac fly by Phillip Lenoir, and Logan Ray scored as a result of an error by the Tigers’ third baseman.

As the game progressed, Woodley seemed to only get stronger on the mound for Jemison, while their bats only seemed to get hotter at the plate.

Logan Ray and Chase Deason drove in three more runs with singles in the fourth, and an eighth run scored on an error by the Tigers’ right fielder.

The fifth inning was a copy of the fourth, as Jemison plated four more runs to take a commanding 10-run lead.

Two RBIs by Will Lenoir and two more runs gifted via error sealed the deal, and Jemison won this one 12-2 in five innings.

Will Lenoir led the way for the Panthers at the plate as he gathered three hits, drove in three runs and scored three more.

On the hill, Woodley earned the win with five strong innings of work, striking out seven and only giving up two earned runs.

Eiland Cleckler suffered the loss for the Tigers, and Cleckler’s early RBI double was the lone bright spot at the plate.

Janiya Moore crosses the finish line ahead of the pack to win the Junior High 100 Meter Dash during the... read more