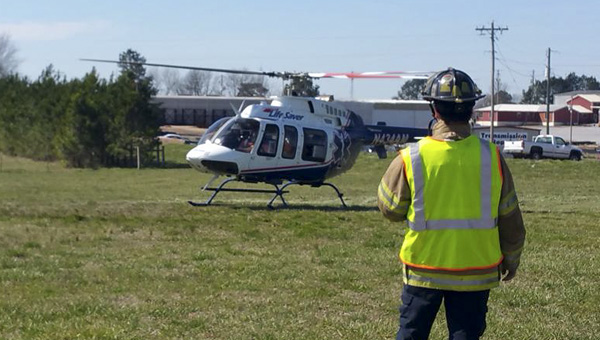 A landing zone was established on the corner of County Road 73 and County Road 50 after a female partially severed her hand on a wood chipper Monday morning. (CONTRIBUTED PHOTO)

A Chilton County female was transported by emergency helicopter Monday morning after partially severing her hand on a wood chipper.

“It was actually a farming accident,” Smith said. “The lady was out on her tractor doing some work and got her hand caught in the wood chipper.”

Smith said the female walked to Fab Weld Steel, which was located near her residence, to seek help.

Fab Weld Steel clerical worker Melanie Gilbert said she was at work when she was alerted that the female was seeking help.

“She initially went to her neighbor’s house, but then she walked over to our business and was screaming ‘help,’ ‘help,’” Gilbert said. “She was asking for someone to call 911 and that she needed an ambulance.”

Once 911 was called, Gilbert said employees at Fab Weld began looking for blankets or First Aid supplies to help until 911 could arrive.

“We were scared she was going to go into shock once she realized what had happened,” Gilbert said. “Thankfully though, throughout the whole time of waiting for help, she was able to remain really calm considering the situation. She even had enough forethought to ask someone to write down her information on a piece of paper in case she passed out.”

Smith said once she was on the scene, she assessed the patient and saw it was an amputation.

“I called for Lifesaver at that point,” Smith said. “She had lost four of her fingers.”

Smith said a landing zone was established in the victim’s yard on the corner of County Road 73 and County Road 50.

She was transported to UAB in stabile condition.

“It was definitely a crazy situation,” Gilbert said. “It could have been a lot worse. We knew she was in pain and was hurting, but we were just trying our best to see how we could help and keep her as calm as possible until help could arrive. We are just thankful she is OK. It was a life-threatening situation, and the fact that she was able to walk to our business and remain as calm as she did was really remarkable.”

RPS responded to the scene as well as Jemison Fire Department who also assisted with the call by helping to establish a landing zone.

As of Tuesday morning, Gilbert said the victim was recuperating at the hospital.

Leighanne and Brantley Bice recently bought Elite Salon from Amber Price and joined the team of six stylists at the... read more